I just returned from an excellent three day visit to Canaan Valley Resort (CVR) in West Virginia over the weekend of January 19-21, 2018. I first skied this resort in 1979 and over the years I’ve developed a strong affinity for the area and enjoyed some great ski days. If you had the good fortune to be in the neighborhood, who could forget skiing at Canaan Valley during Winter Storm Jonas in 2016? If there are three constants at this mountain they are low crowds, low prices, and low drama. 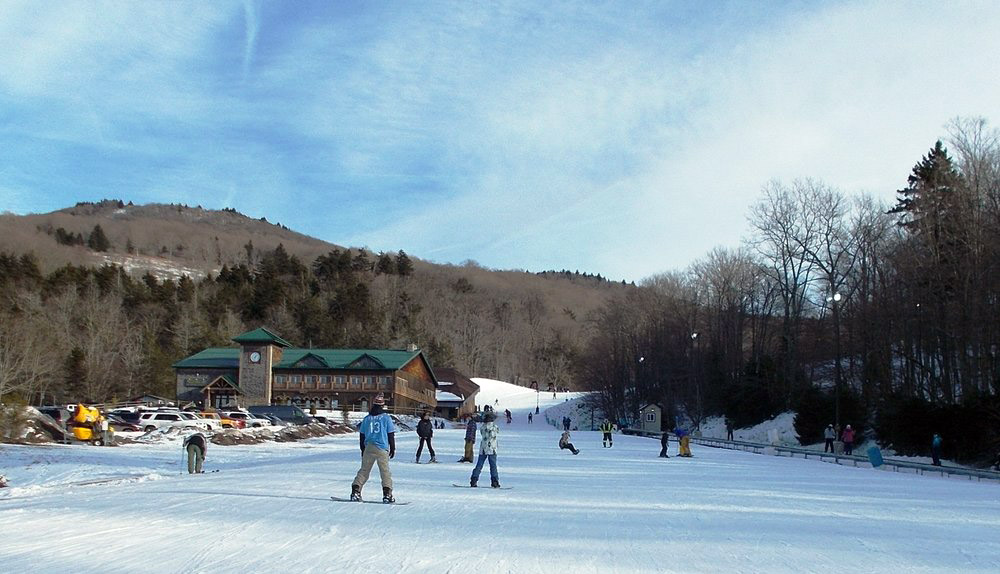 The never-ever beginner area is served by a carpet lift and conveniently situated next to the CVR ski lodge. Photo by Jim Kenney.

There is something very comforting about CVR, even on the rowdiest ski days. It could be the nice accommodations at the newly built (2013) CVR lodge a couple miles down the road from the ski area. It could be the ever-improving ski product provided by longtime Mountain Manager Mike Chaney and his snowmaking crew. Or in the case of novices to our sport, the fine CVR comfort factor may come from the low key, personalized lesson experience offered by Ski School Director Warren Wik and his friendly staff. Whatever, CVR is the place to go for shelter from all literal and figurative storms. 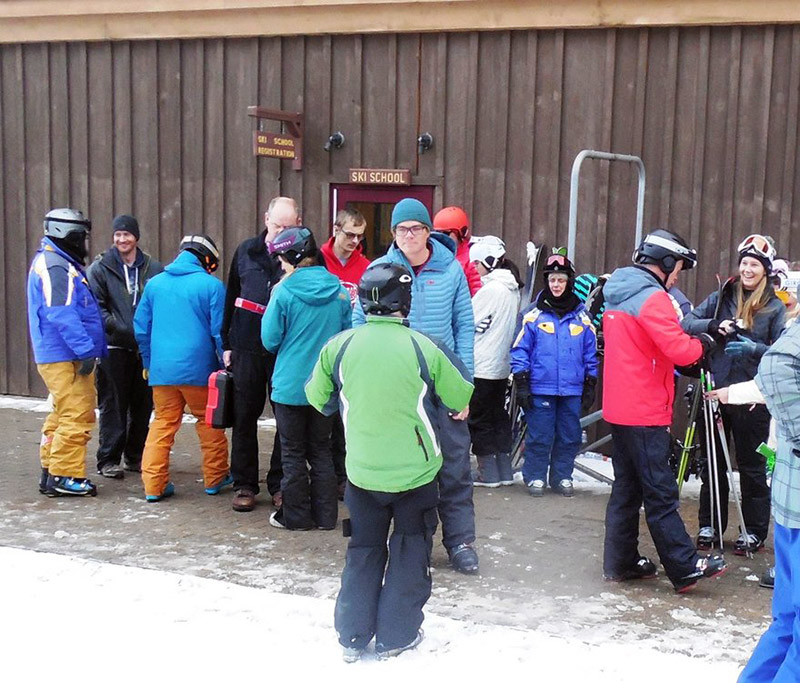 I believe CVR received four or five inches of natural snow a few days before my visit and they had obviously supplemented that with snowmaking. Friday, January 19 was a really pretty ski day with seasonable winter weather for a change. The sun came out, temps reached about 40 degrees and trail surfaces were good. I spent several hours logging ski miles with my buddy JohnL. 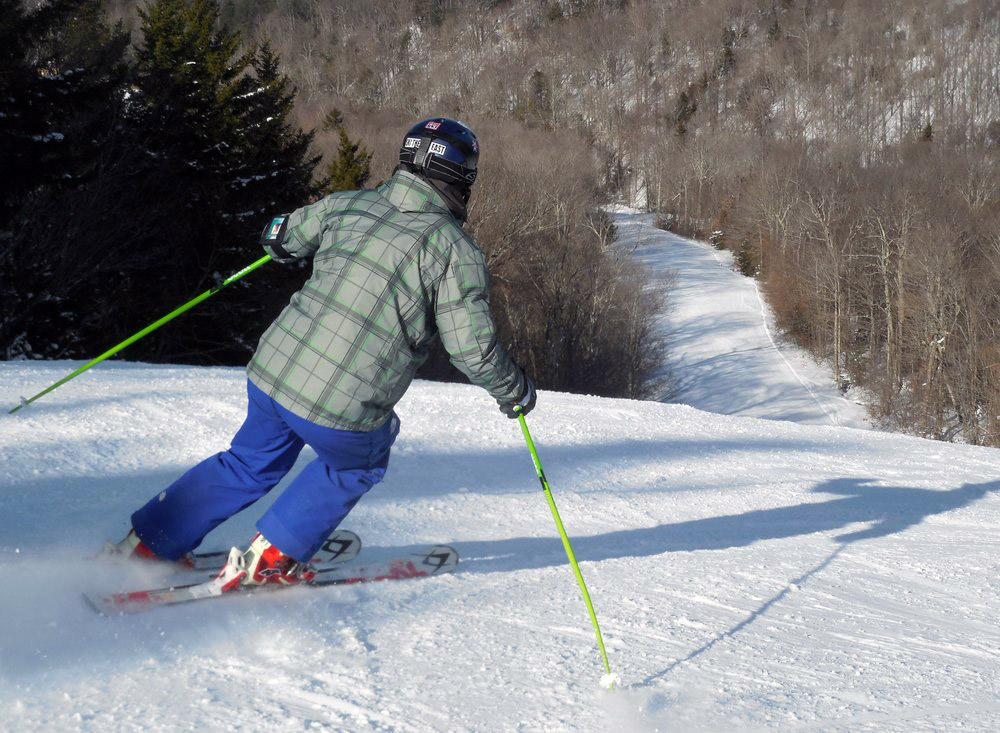 Getting ready to defy Gravity. Photo by Jim Kenney.

Our favorite runs were Gravity, the race course line on Upper Ramble, and Chute. Gravity always has a nice little black diamond headwall. Upper Ramble had some fun corduroy on it most of the day, and in the vicinity of Chute we found loose, ungroomed snow that presented a bit more challenge than the standard groomer. 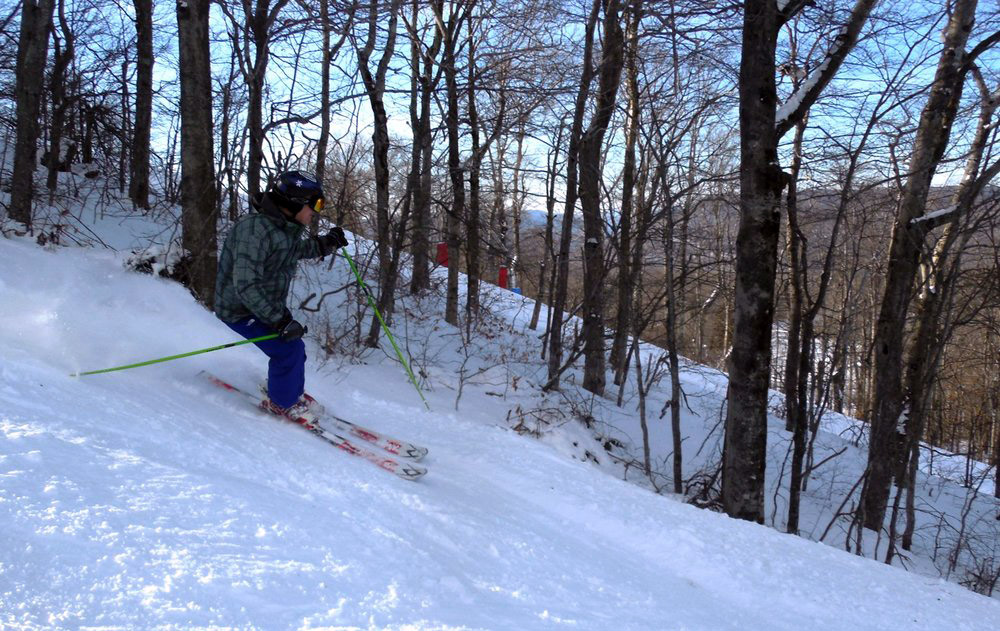 JohnL carving up the Chute. Photo by Jim Kenney.

Being a weekday, there were no lines anywhere on the hill. And we had the trails mostly to ourselves. In fact, we only rode a chair with another person once or twice all day. The online weekday rate for an adult lift ticket at CVR is around $43. See what I mean about low crowds/prices/drama? 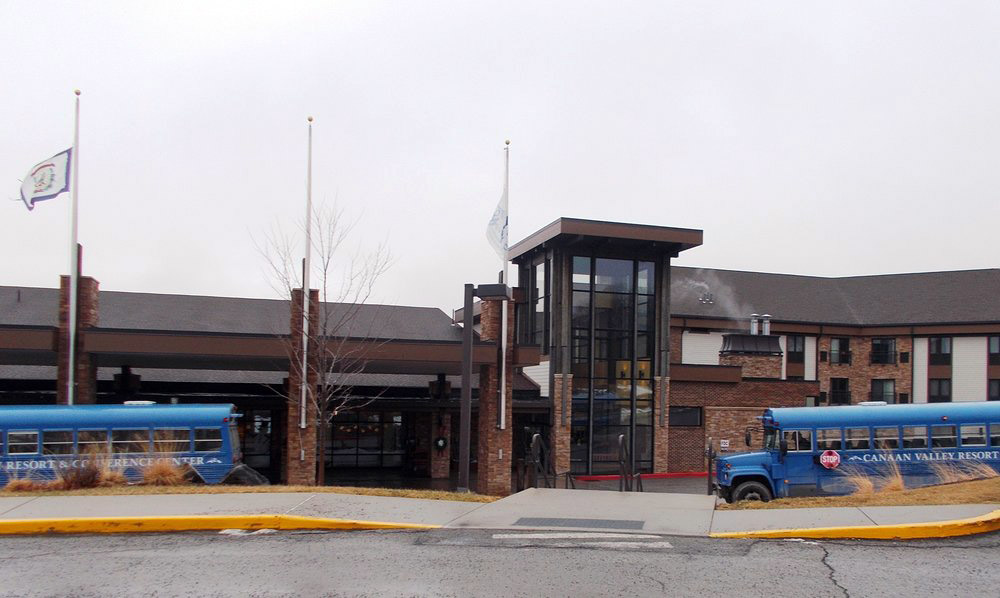 Free, frequent bus service links the three miles from the CVR lodge to the ski area. Photo by Jim Kenney.

Saturday started cool and cloudy, but the sun came out for a nice afternoon in the mid-40s. There was a moderate, but very manageable crowd on the mountain. I met up with some local friends and we had a great time. Almost the entire mountain was open except for Dark Side of the Moon, Upper C Liftline, Spruce Trail and few other natural snow-only runs. Timber Trail and Ramble provided the runs of the day. 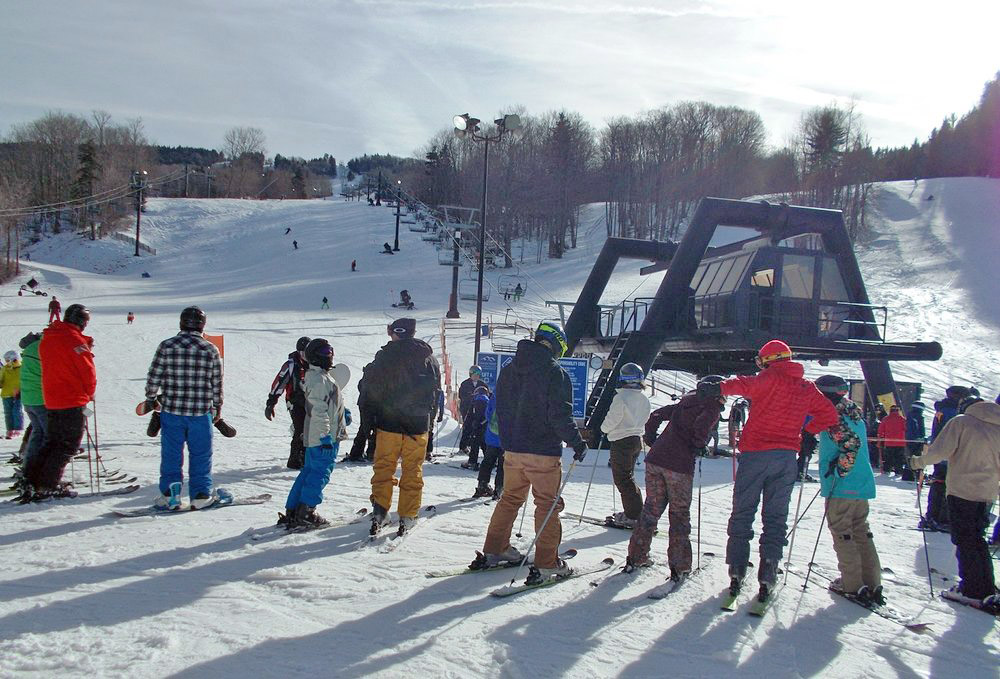 Saturday at the Weiss Quad Chair. Photo by Jim Kenney.

On Sunday I skied two hours before returning to my excellent accommodations at the CVR lodge to check out and head home. It was foggy and a bit drizzly at 9 a.m. It dried out, but remained foggy when I quit at 11 a.m. Since my visit, another winter warm spell has befallen the mid-Atlantic, but the world keeps turning and soon the fine CVR snow groomers should get things back in order. 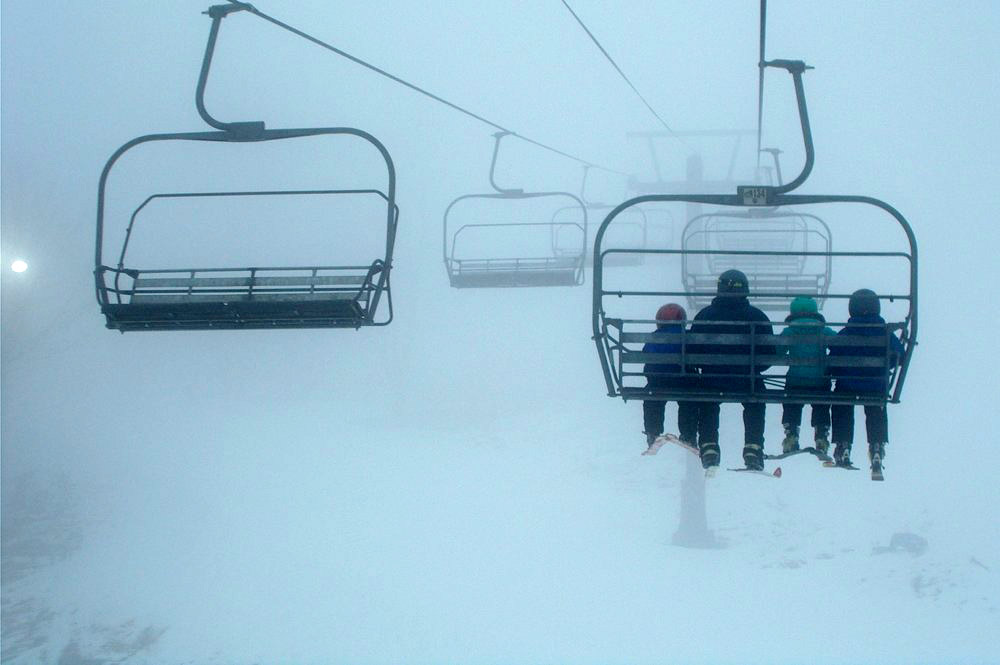 Chairlifts through the fog. Photo by Jim Kenney.

I want to make a special mention of the beauties of U.S. Route 48 (Corridor H). On my trip out to CVR on Friday morning it took me 2.5 hours from Falls Church, VA to Davis, WV, the quaint gateway town to Canaan Valley. Route 48 was so quiet my stress levels went down instead of up during the drive, unlike some other ski getaways (I’m looking at you Interstate 70). If you can get out of Dodge before the afternoon rush hour, then getting to Canaan Valley is really delightful. My return trip on Sunday was just as pleasant. What a contrast from the journey in 1979! 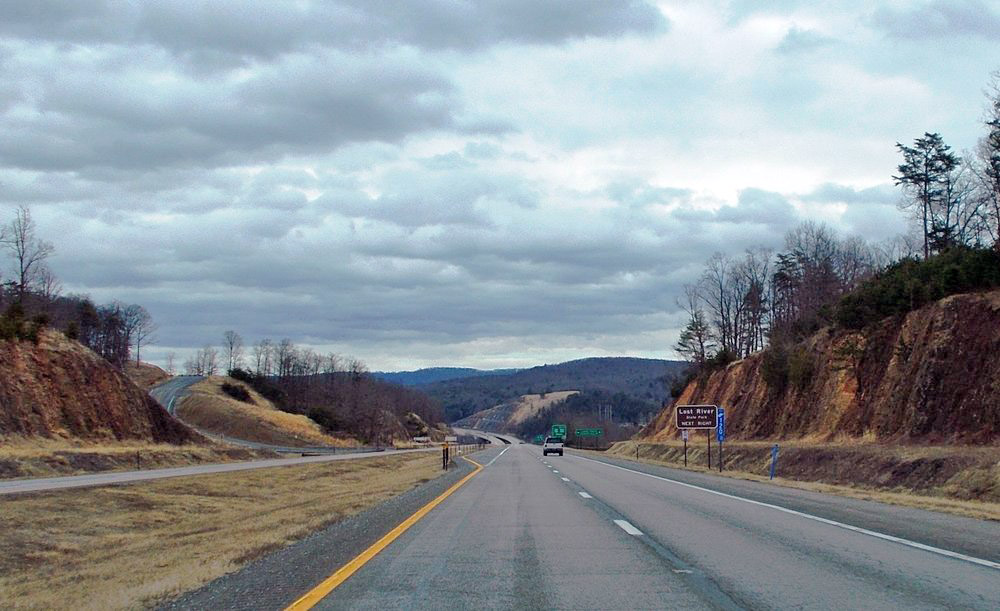 Route 48 is a breeze. Photo by Jim Kenney.

For years the lament about state-owned CVR was, “too bad WV keeps such a tight leash on the budget.” And, “if only they had the money, they could do so much more.” Well, it turns out a conservative, but fiscally stable environment ain’t such a bad thing for a ski area after all. This is especially true at CVR with the current experienced and outstanding management team that knows how to maximize its resources. CVR is firing on all cylinders these days and has lots of fun things going on. I never even made it to the fancy, new tubing hill. Maybe next time? 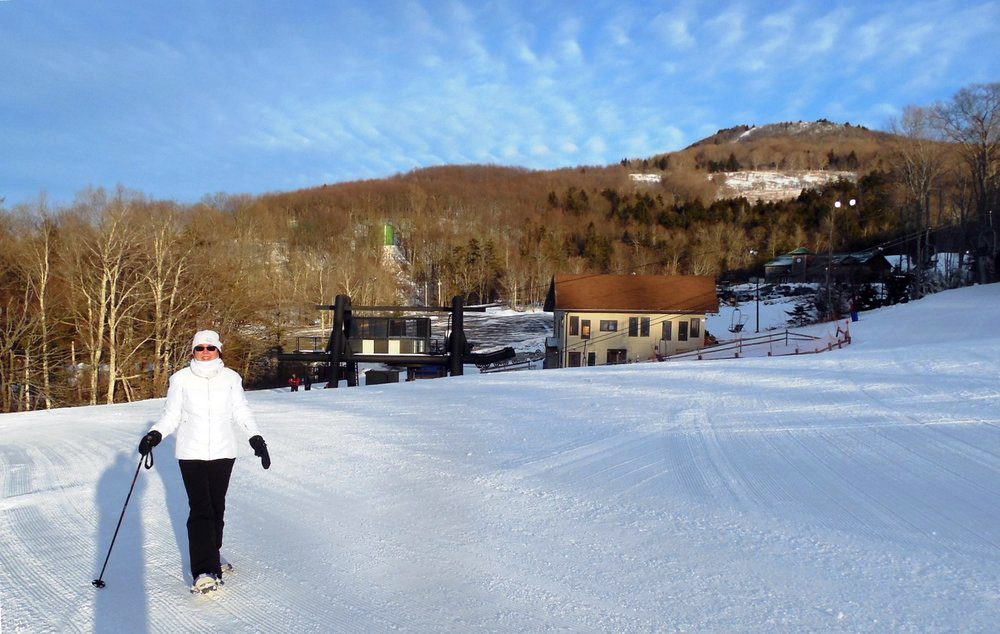