You have likely heard that the snow gods have not been happy with the American West this season, and all destinations there seem to have accumulated much less snow than normal; Colorado’s Crested Butte has not been spared. That being said, I am going away happy.

Crested Butte is always an amazing place to ski. It is large (1,500 skiable acres), is surprisingly quiet, is well-designed, has a good distribution of difficulty, has a rise of over 3,000 feet, and is in beautiful Colorado. It also appears to be populated only with nice people. (Maybe there’s a test for employment and/or residency.) 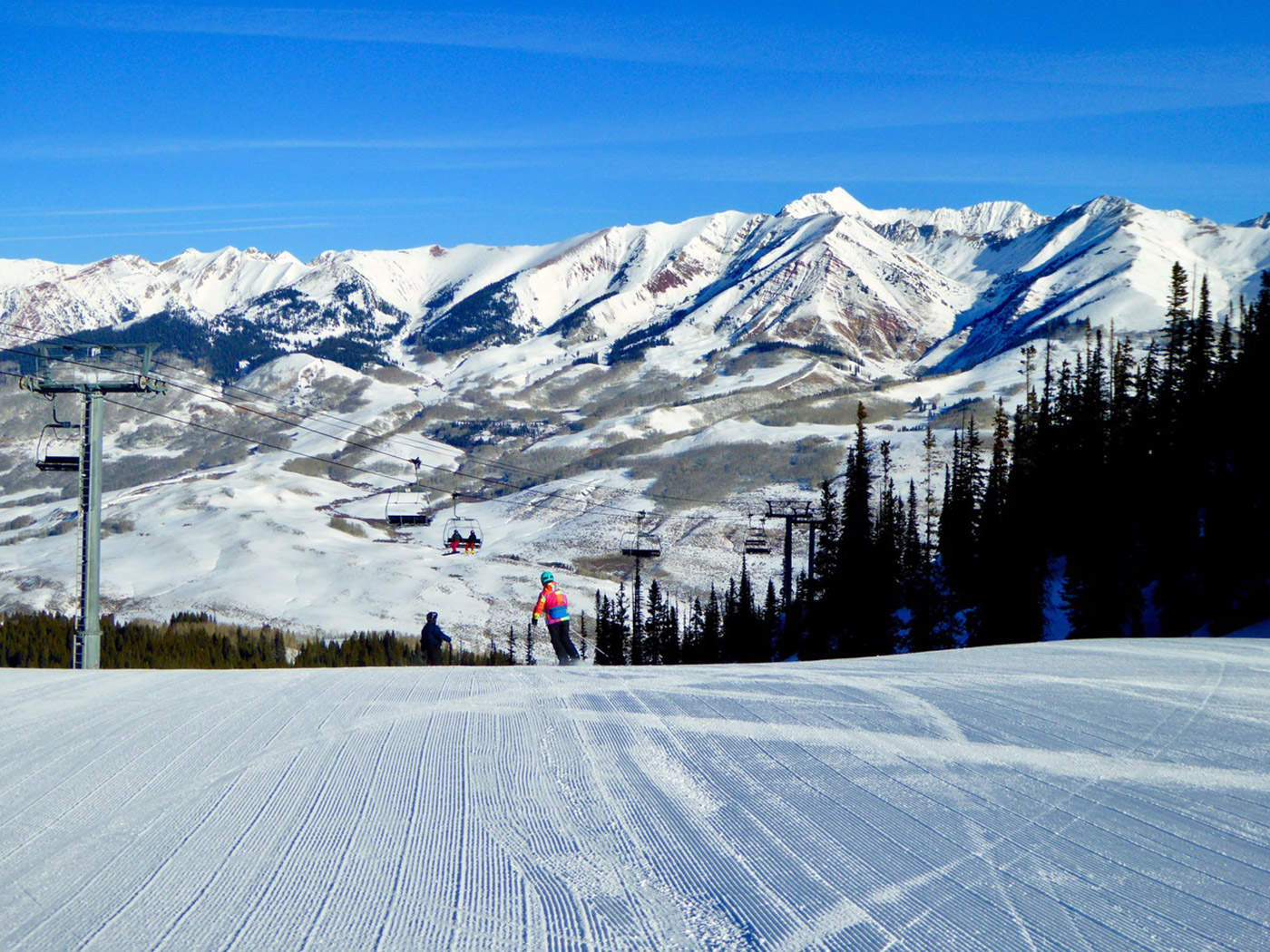 Before I amplify on these, let’s address the snow and weather issues. In addition to the dearth of snow, it was relatively warm while I was here, reaching the mid 30s at the base. This is a surprise: Crested Butte is often one of the coldest places to ski in the continental United States. (For you Eastern skiers, that is not as bad as it sounds: the dry air makes it feel much warmer than it does in the East for the same temperature.)

The combination of temperatures and lack of snow meant that things were dicey off piste, most of the extreme skiing terrain was closed, a small number of non-extreme runs were also closed, as were a few of the low glade runs. Also, the bumps were harder than one would like. By the end of the week, a few dirt patches began to appear in some of the runs at the bottom. 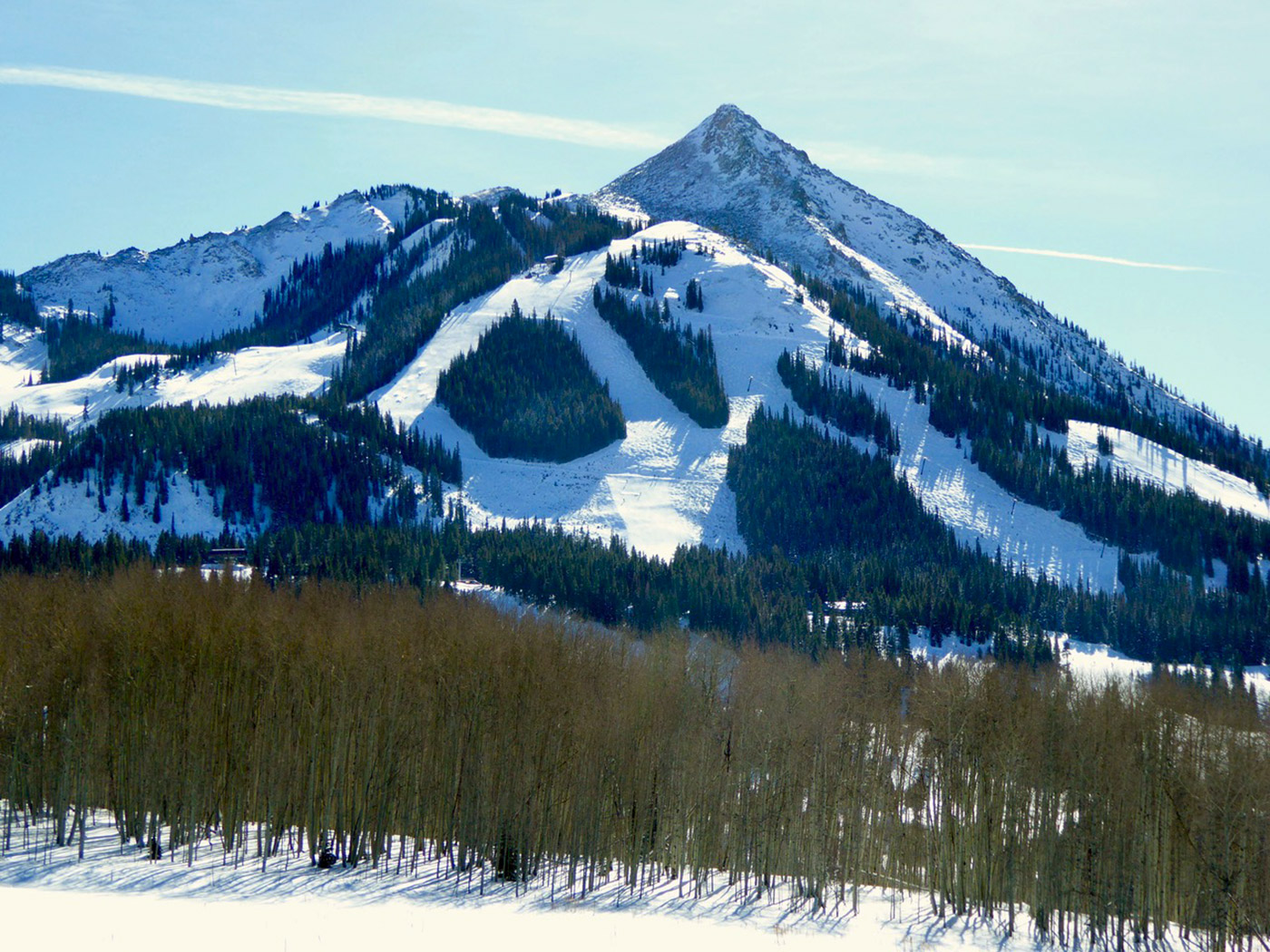 Last year, Crested Butte got 11 feet of snow in the month of January alone. This year, there was no snow while I was here, and the last snow had been a week before my arrival. With those two data points, it might be hard to draw conclusions on how much snow you should expect when you visit. But when it doesn’t snow, Colorado offers a special combination of crisp dry air, stunning scenery, and sunshine that leaves one incapable of being unhappy. Just being outside here on my skis made me love life. Seriously.

Don’t let the weather report suggest that I was deprived of skiing. There were plenty of groomed runs (green, blue, and black) that were a pleasure to bomb down or float over. There were several substantial terrain parks (nearly empty!) including a great banked slalom course that I couldn’t get enough of. As I mentioned before, Crested Butte is huge, and I didn’t get bored.

The mountain base is just over 9,000 feet. From there, two high-speed quads give access to 121 runs, with 23% beginner, 57% intermediate, and 20% advanced to extreme. (Crested Butte is known for its extensive extreme skiing territory.) 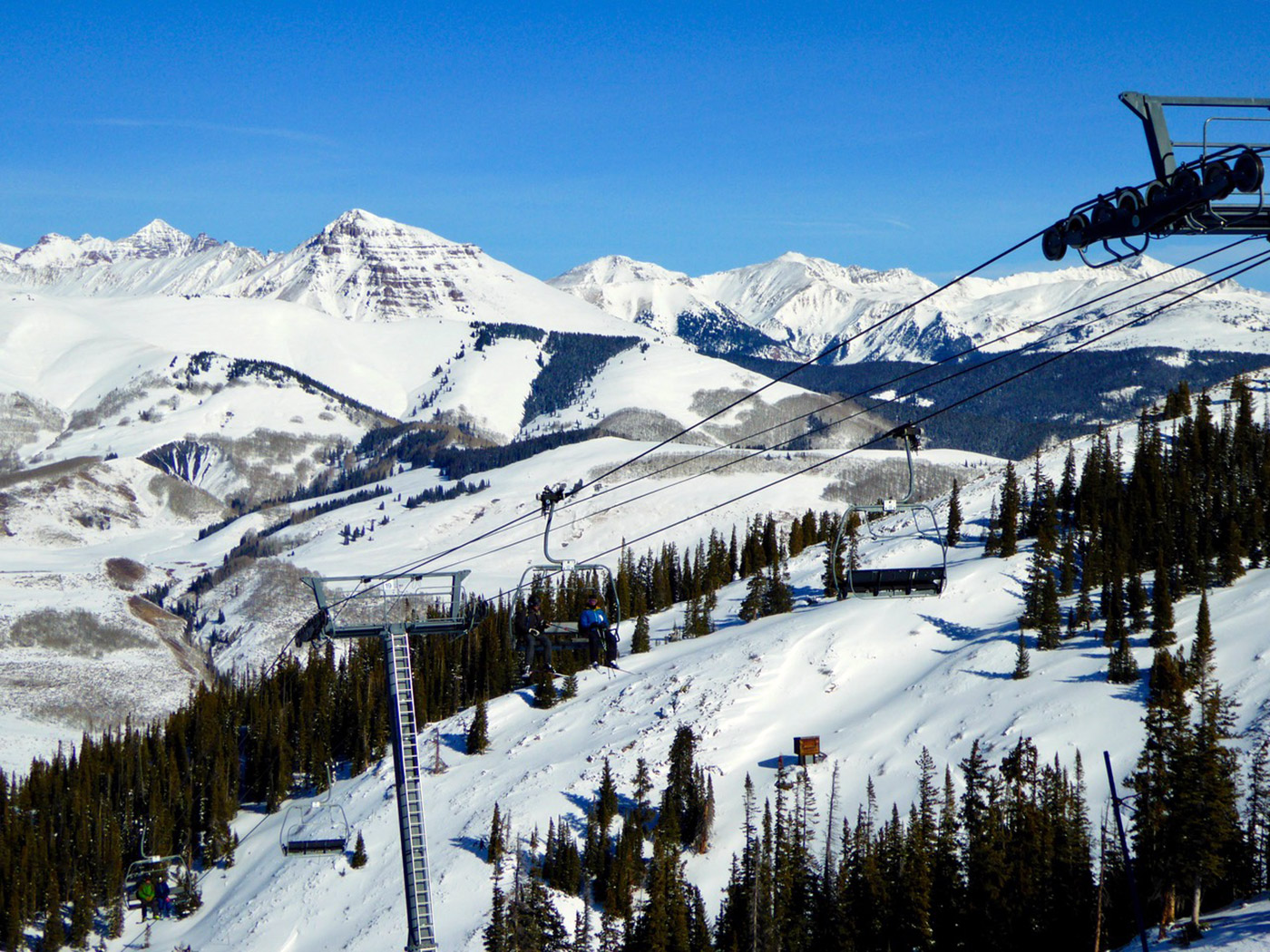 There are three eating establishments on the mountain. The largest is at the base of Paradise lift, and is typical of ski mountain warming houses, with the usual fare. At the 10 Peaks area, near the top of Painter Boy lift, is the Umbrella Bar, which offers a 360-degree view through a polygon of glass topped by an umbrella that seals out the weather. As the name implies, it encloses a full bar. But there is also a window serving paninis, salads, drinks, and snacks. Most of the seating is outside; eating lunch in the sun “on the beach” here is very pleasant. For a fancy meal in a fancy (but rustic) setting, go to Uley’s Cabin (you may need reservations at busy times). Or visit the Ice Bar in front of Uley’s for an informal snack or drink. (Yes, the bar is really made of ice.)

My skiing highlights included blasting down International (a black run that comes straight down the mountain and covers nearly the entire 2,000-foot rise of the Silver Queen lift), the banked slalom course on Cascade, and a quirky little twisting romp through aspen and pine called Home Owners.

Did I mention that Crested Butte is quiet? I would frequently ski an entire run without seeing anyone else (unless I brought a friend). I never encountered a line of more than 3 chairs at a lift, and it was often the case that there was nobody in the maze when I would arrive. It was fabulous. 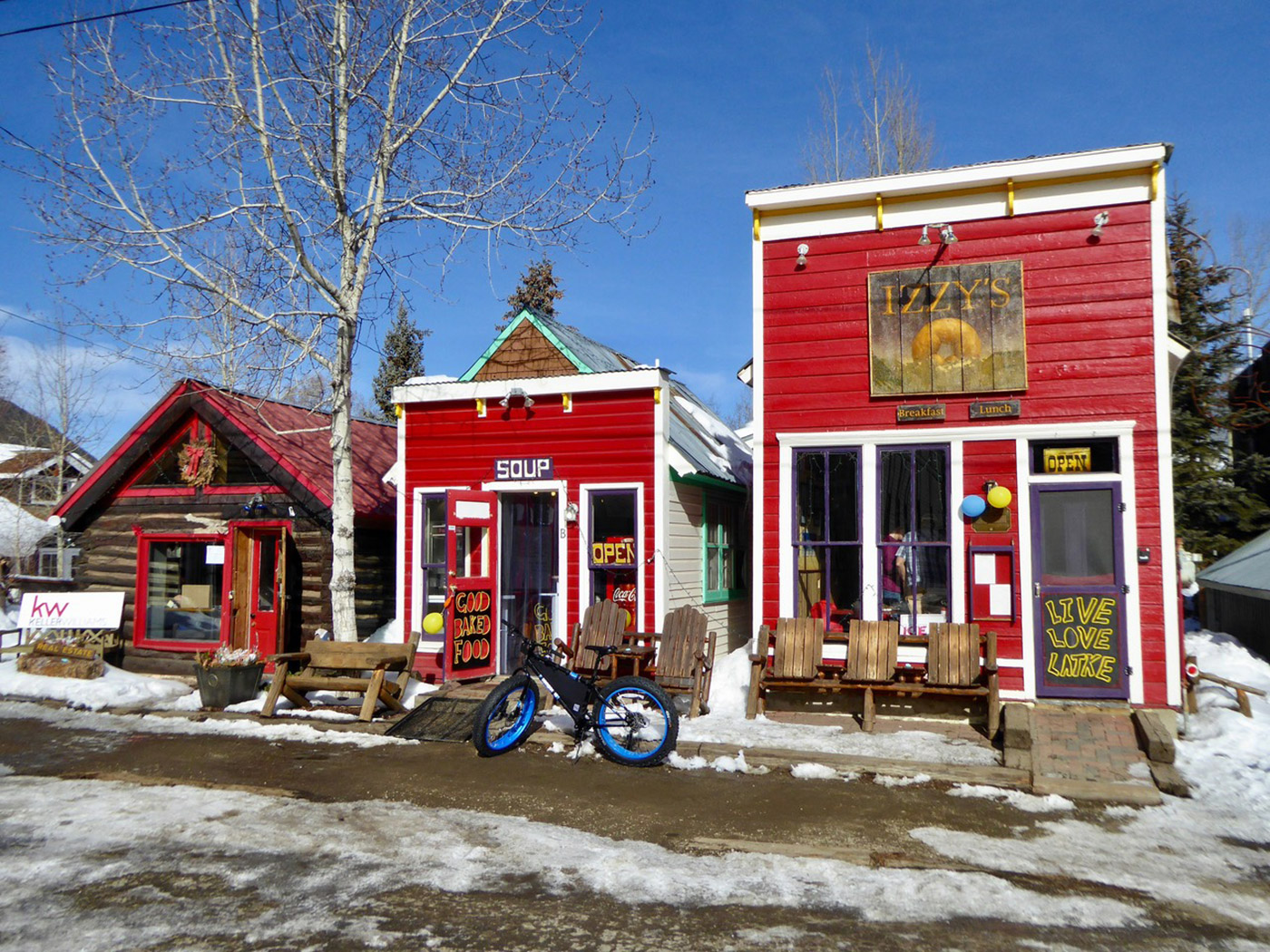 The base area has a village that includes the usual distribution of sport shops, eateries, souvenir shops, condos, hotels, and the like. A free bus departs the village every 15 minutes making a 10-minute ride into the town of Crested Butte. Additional buses at the base will take you to other locations.

I stayed at the Grand Lodge, which is right on the bus circle and a 5 minute walk to the slopes. I recommend the Grand Lodge: it has great rooms, a very nice staff, a decent restaurant, and free good cookies in the afternoon. I do have a serious complaint: they are surprisingly unpleasant about taking skis to the room, to the extent that it really is a logistical problem; they should reconsider the policy. 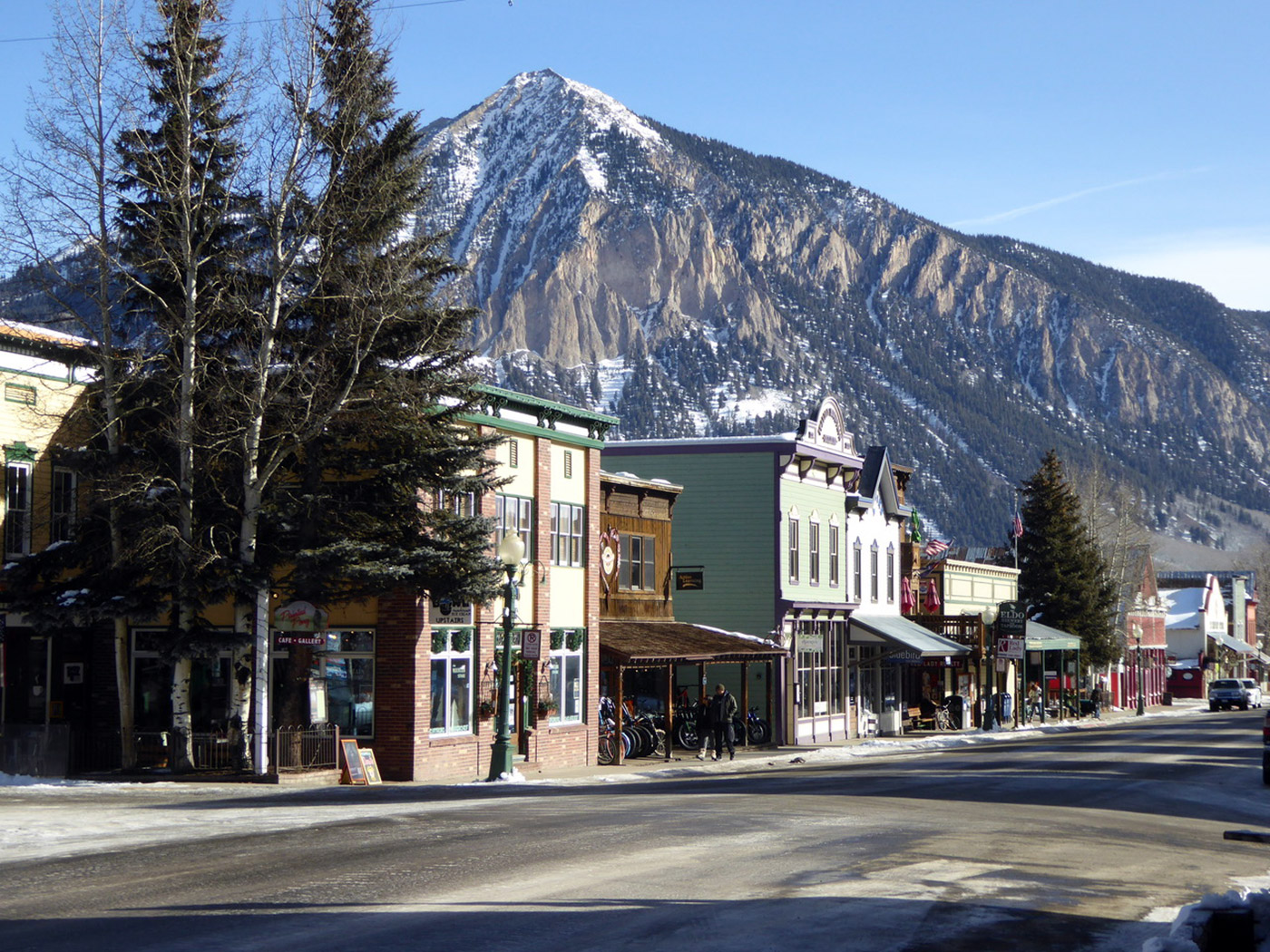 The town of Crested Butte is one of the few ski places that really shows its roots as a Colorado mining town. It offers many establishments for eating, as well as a nice assortment of shops. But it is worth a visit just to see the quaint buildings, many dating from the 1890s, that have been well-maintained and transformed into fun stores and dwellings.

The Crested Butte ski area is reached by flying into Gunnison Airport, which is a 45-minute drive from the mountain. The usual approach is to fly to Denver, then to Gunnison.

As I prepare to leave, Crested Butte is expecting two days of snow starting tomorrow. The snow gods are nothing if not full of humor.

Every once in awhile, I spend my week of skiing someplace else in North America. But then I return to Colorado and wonder why I ever went elsewhere. 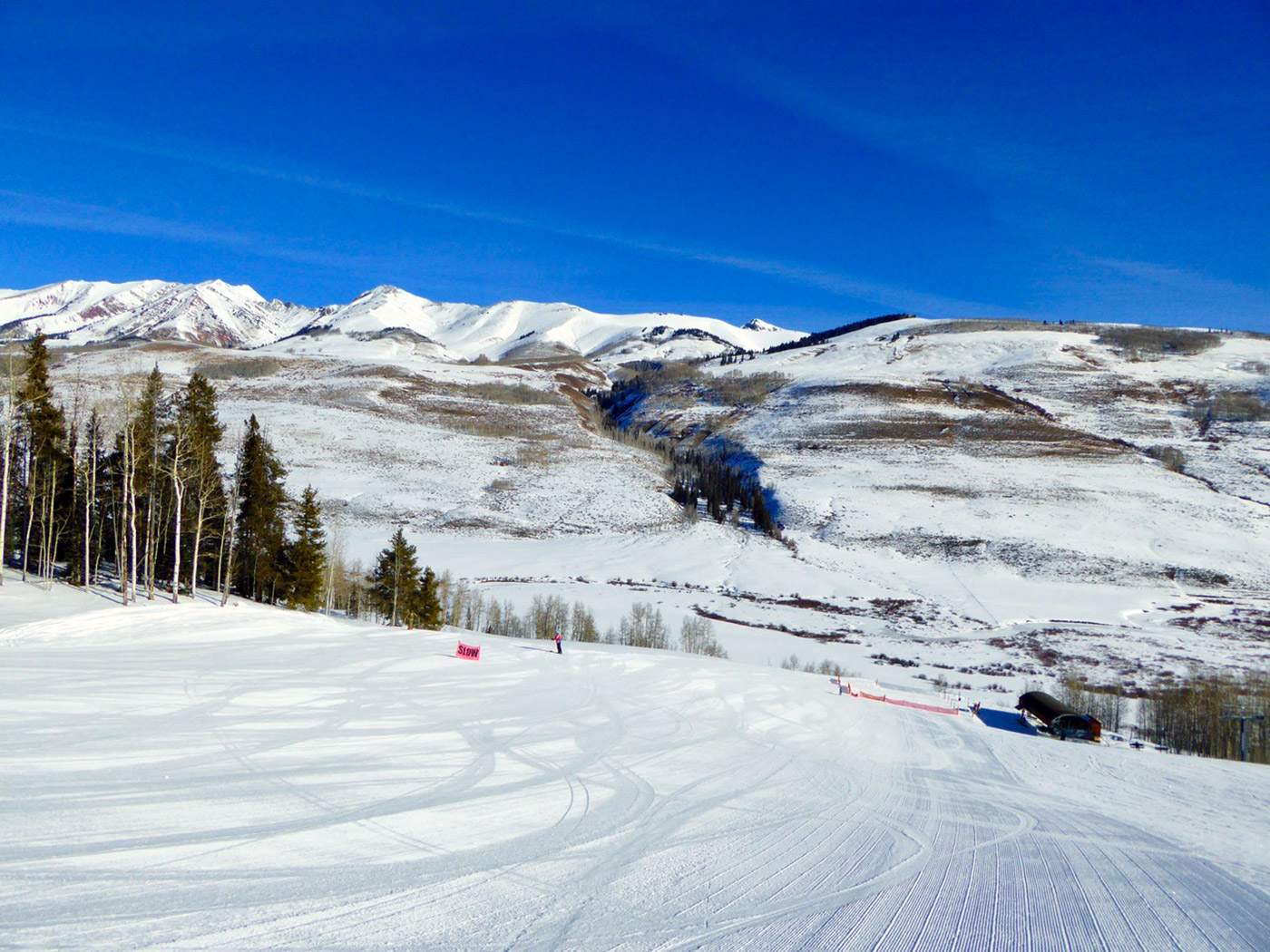