Reflections from the Past: Revisiting Liberty Mountain 2
By Christopher Blunck, Guest Contributor
January 19, 2018

Driving up to Ski Liberty this past weekend with my six-year old son brought back a lot of fond memories I have of my childhood and young adult life. I wanted to share a few of them with you just to give you some perspective of my experience and how much enjoyment I had sliding across the border to Pennsylvania to head down the slopes at Liberty Mountain Resort.

I skied from the age of 4 to when I was a Freshman in high school (14? 15?). This was 1991 and a friend of mine wanted to sell his K2 snowboard that looks nothing like a snowboard from today. I bought the board from him because I liked surfing and I wanted to “ride the mountain”.

When I turned 16 and got my driver’s license I used to drive up to Liberty on Saturdays or Sundays with that board in the back of my blue 1989 S10 pickup truck. I had no idea how to snowboard but I had decent balance and I did my best. I have no idea how I afforded to make the trip - maybe my parents bought me a pass? I can’t recall. As a parent of two children under the age of 7 I can’t fathom cutting either of them loose at such a young age to drive such a distance and participate in such a potentially dangerous sport, but I suppose that the more experience you have as a parent, the more you trust your child to make the right decisions. Still, sitting on the other side of that equation I can’t imagine how my parents relaxed on those days when I threw my snowboard in the back of the trunk and headed up to Liberty.

I stuck with it for about 2-3 years in high school until I went off to college at the University of Maryland at College Park in the Fall of 1995. My home is a 5-minute walk from campus and a few people in my dormitory liked to ride/ski. When we realized our shared interest we bought group ticket plans. Liberty ran promotions where if 5 people signed up, you received large discounts. We enrolled in the plan and then started heading up to the mountain on a regular basis. On Fridays after I was finished with classes I’d walk home, pick up my truck, and drive back over to Maryland. We’d throw all of our equipment into the back of the truck, and I’d drive someone to off campus where they would pick up their car. Then we would return to campus, pick up our friends, and head up to Liberty. 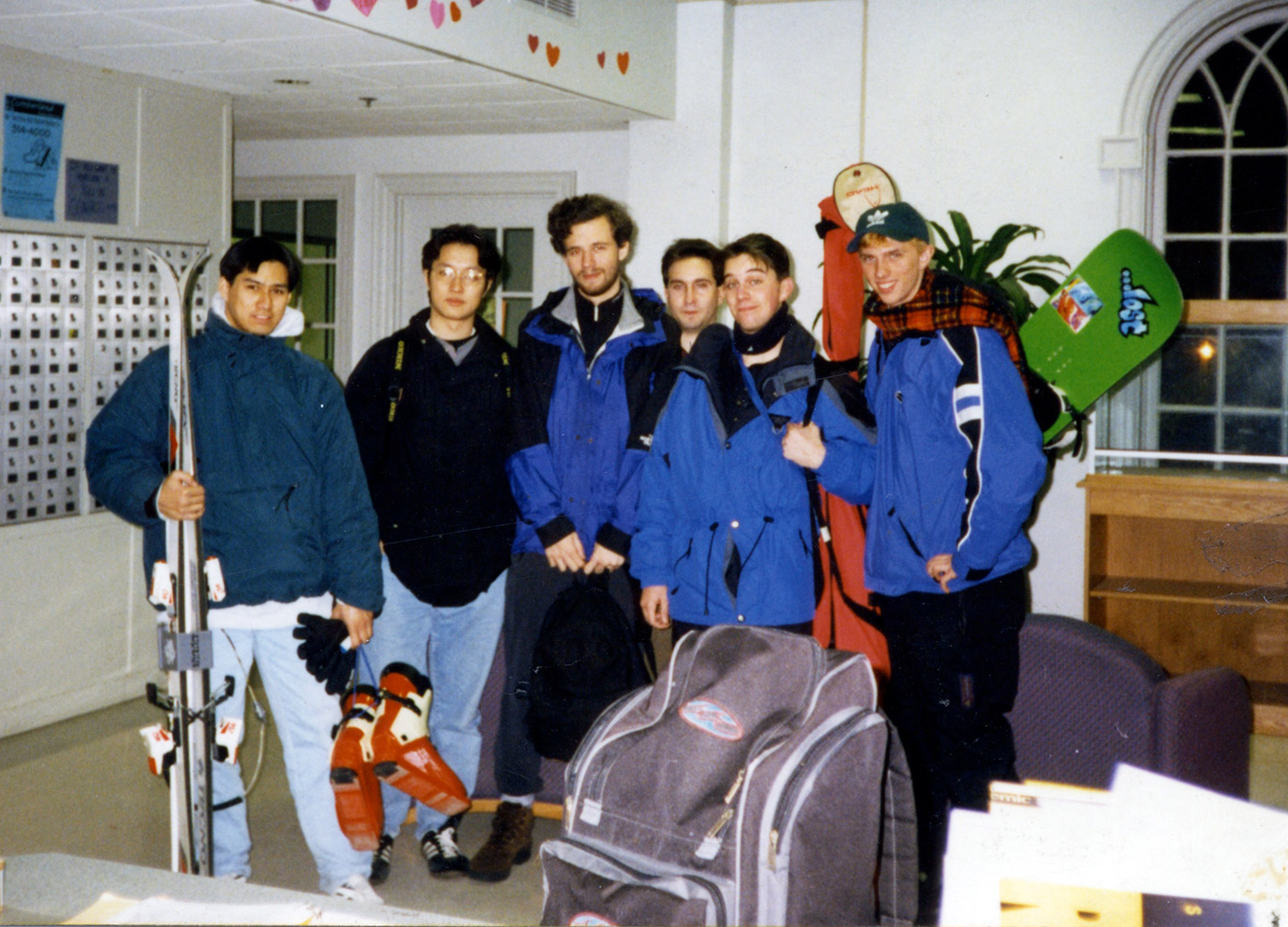 College friends preparing for a trip to Liberty Mountain sometime in the mid-1990s. Photo by Christopher Blunck.

We’d arrive at the mountain sometime around 6 p.m. and purchase a 4-hour pass. We had a blast skiing and riding and horsing around on the mountain. It was the mid-1990s and all of my friends were Computer Science majors (like me) and that was the hey-day of the dot com era. We felt like we were at the apex of our lives - ascending in our educational and occupational identity and bonding with new friends we had just met in close proximity in our dormitory while realizing our shared interest in snowboarding and skiing.

We’d often “close down the mountain” by waiting at the bottom of the lift until the operator said it was time to rope off the entrance. Then we’d ride up to make sure we were the last ones to ski down the mountain. We knew several of the ski patrol and we liked being part of their crew that skis down to ensure nobody has fallen or is missing. That felt really cool - it felt like we were part of the Liberty family!

There wasn’t much infrastructure back then at the bottom of the mountain. No fireplaces or anything. The lodge was closed down. By 10:15 p.m. all the respectable folks had moved on towards their final destinations for the evening. But not us! Our night wasn’t finished. We weren’t finished with our fun. And this is where you’d think the story would make a hard left turn towards “and that’s when we pulled out the bong and the beer,” but that’s not how this story ends. This story goes right down the predictable path of “these guys are just some nerdy computer science dorks.”

One of our friends was into astrophysics and he would often bring up a telescope and train it in on Jupiter or some other planet in the solar system. With so much light pollution in College Park we could seldom see stars and planets but up in Fairfield, PA we had great visibility! We’d sit out in the vacant gravel parking lot gazing up at the stars while all of our muscles were aching from an awesome 4-hour session on the mountain.

If we were lucky we’d make it down to the Pizza Hut in Thurmont and eat a pie shortly before they closed. If we couldn’t get to the Pizza Hut then we’d fail over to the Taco Bell because they were “Open 24 hours.” It was often a real challenge to figure out “do we stay here and look at the stars or do we go eat pizza?”, realizing the cost of star gazing was trading off pizza for tacos. At the time it seemed like such a significant decision, but 20 years later, I now see how either choice was pure bliss.

We’d eat our pizza or tacos and then head down I-270. Since we were all into coding and technology it was especially welcoming coming down the “I-270 Technology Corridor” (further affirmation that our degree choices, although extremely stressful and challenging, would lead to occupational opportunities). We’d often take note of the new buildings popping up along the highway. Sometimes we’d go ask our professors questions like “Hey, have you heard of a satellite company called Hughes?” 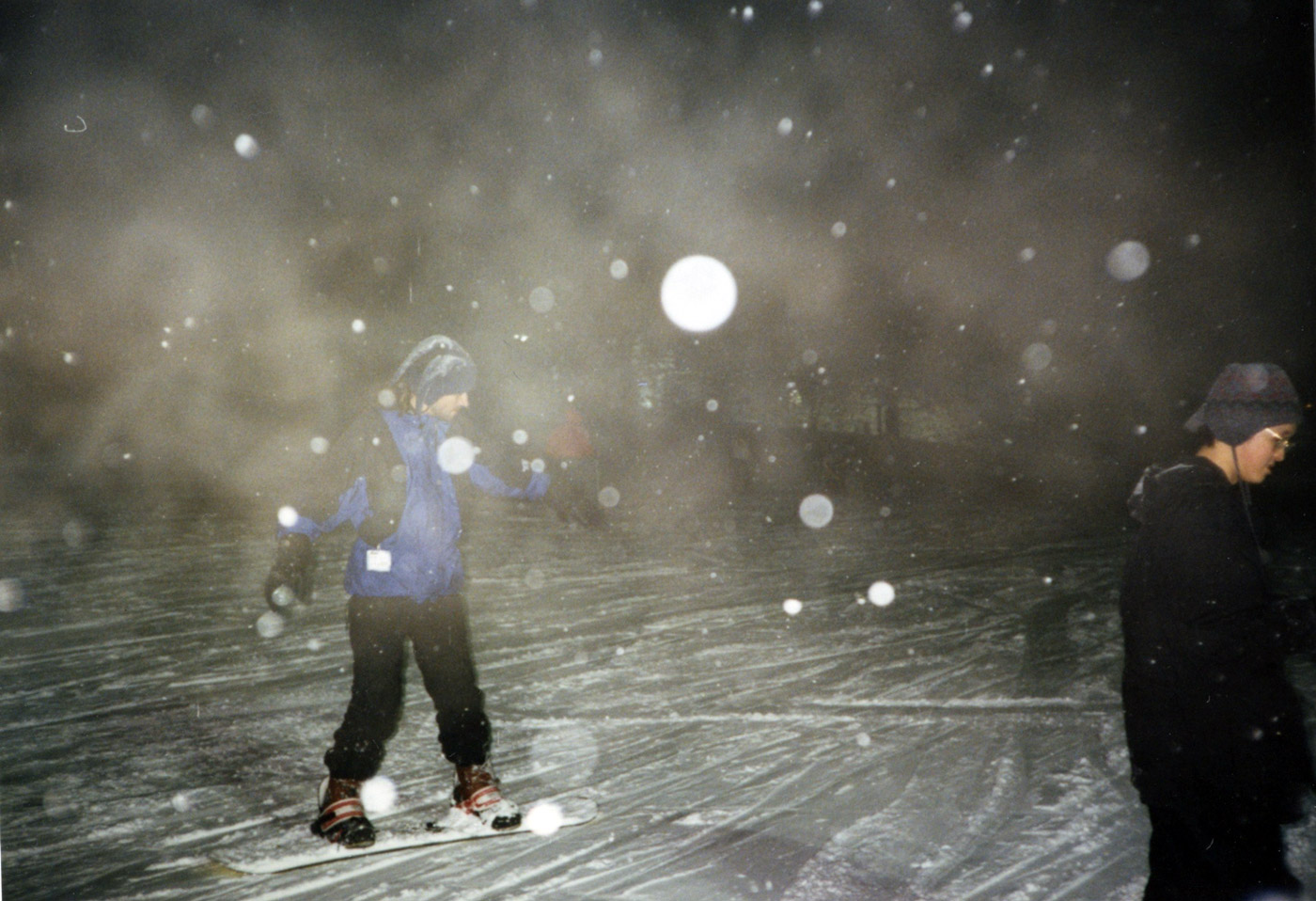 Before smartphones and digital photography, the author took this photo with an analog camera one night at Ski Liberty in 1996. Photo by Christopher Blunck.

When we arrived in College Park we made a pattern of cleaning off our boots, bindings, and skis. We’d put away our snow pants and someone would open up their PlayStation 1 and we’d play some Final Fantasy VI. We’d power on our CRT displays and raise our Pentium 90MHz “Tower” form factor computers into awake state so we could “check our mail” (something folks seldom did back then). We were all tired, sore, and filled with happiness.

We did that for about 2-3 years almost every weekend until we all got into upper level classes. Time and distance created an impedance towards making the trip up north, and slowly the number of participants dwindled. It’s kind of sad, but that’s the progression of life as it becomes more complicated and busy.

This past weekend was really special for me because prior to my drive with my son Aiden, I recalled all of the fun I had with my friends and I wondered if those same places (e.g. Pizza Hut and Taco Bell) still existed. I remembered star gazing in the gravel parking lot and I thought: “I wonder if they paved over the gravel?”

When we turned in to Liberty I thought “WOW this place looks GREAT compared to what I recall from 20+ years ago” (which says a lot because it’s very easy for places to go downhill!). When we pulled into the parking lot I thought “wow, they even paved this!” Then I got to the end and saw it was gravel, and I smiled thinking, “just like old times!”

It was great coming up to Liberty with Aiden and great reliving some fond memories I have of a place that was very special to me in my youth and will now be special to me because I’ll have the enjoyment of watching my son(s) learn to snowboard and start building their own memories.

And who knows, maybe 10 years from now after many weeks on the slopes with Aiden I’ll feel like I know my son so well that I won’t have any anxiety over letting him drive up there across the border alone and participate in a potentially dangerous sport!

Christopher Blunck is a software developer by day and a snowboarder by night.

Great to hear stories from another member of The Tribe.  Long may you and Aiden ride!

Christopher, this is a great set of reflections on the meaning of skiing or snowboarding in a person's life.  It's often hard to explain to others what's so enjoyable, but, for me, your article explains that it's not only about being on the snow.  It's the excitement of traveling with friends, the draw of a weekly routine, and the fun in the things you do afterwards.  Packing a telescope along with your snowboard?  Whoda thunk?

Glad you've gotten back out there with your son.  Enjoy!