I recently had two chances to visit Pennsylvania’s Whitetail Resort: On Super Bowl Sunday, and on Friday, February 17, 2017. I was anxious to see Whitetail’s recent lodge expansion, as well as to perform some “product testing” of Whitetail’s snow conditions during this unseasonably mild winter.

Whitetail has invested heavily in modern snowmaking, and it shows: despite receiving virtually no natural snow this winter, on both visits Whitetail had 100% of its trails open and covered with artificial snow, offering excellent conditions. It’s always a little unusual to see white strips of snow on Whitetail’s slopes, bravely sticking out in a landscape that is otherwise completely barren of snow. Thank goodness for snowmaking. 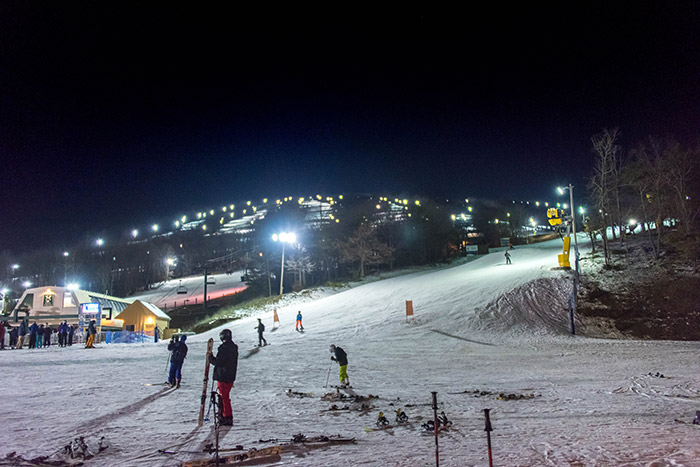 Aggressive snowmaking has kept slopes at Whitetail in good shape, despite an unseasonably mild winter. Photo by M. Scott Smith.

The modest base depth did not have any thin spots, but it was obvious that some sacrifices in snowmaking have been made: whereas Whitetail has covered the full width of trails in past seasons, several trails did not have snowmaking edge-to-edge, effectively reducing their width. There was still plenty of width to ski, but it was a little sad seeing portions of grass-covered trails that were covered and groomed in past seasons. In some cases, it’s clear that Whitetail has decided to permanently cease snowmaking on portions of trails that used to be open. For example, there are now trees growing on the left third of Limelight, to the left side of the lift as you look up.

Between my visits on February 5 and February 17, Whitetail had lost some base, but whenever temperatures dipped below freezing, Whitetail had fired up the snowguns. That left them with great conditions heading into the President’s Day Weekend. With temperatures forecast to possibly hit 70 degrees this weekend, much of that base may return to liquid form by the end of the 3-day weekend. The long-range forecast is bleak for Mid-Atlantic resorts: temperatures will remain mild through the end of February, with little to no chance of snowmaking. Resorts will be forced to get as much out of existing snow bases as possible, and DCSki anticipates some resorts may move to limited operations as they try to preserve their bases and hope for the return of cold temperatures. In the coming weeks, be sure to check with local resorts to verify operating conditions before making a visit.

With prime conditions on Sunday, February 5, I was a little concerned that there might be crowds at Whitetail, but I remembered some advice from DCSki Columnist Matthew Graham: ski resorts tend to clear out on the afternoon of Super Bowl Sunday as people head home to catch the game. Sure enough, I saw a steady line of cars heading away from Whitetail as I arrived at the resort. I had a great evening of skiing under the stars with no lift lines.

I arrived back at Whitetail on Friday, February 17 for some evening skiing, just as the sun set. Temperatures were pleasant, the slopes weren’t too crowded, and the snow was still in good shape.

Whitetail continues to make investments throughout the resort, and these investments show in little and big ways. For example, I noticed that the dressing area on the lower level of the lodge had seen some light renovation. A much larger renovation occurred over the summer and fall: a new wing was added to Whitetail’s base lodge. What once began as a modest, Deer Valley-inspired main lodge has now expanded multiple times over the years, first sprouting a new wing on the right side, and now a new wing on the left side. From early pictures, I was a little concerned that this expansion would make the lodge seem overpowering and sprawling, but Whitetail has done a good job keeping the architecture style consistent. A new, gently curving path was also added leading up to the lodge, which is easier to climb in ski boots than the stairs.

As covered previously by DCSki, this new lodge expansion allowed Whitetail to expand its dining options. 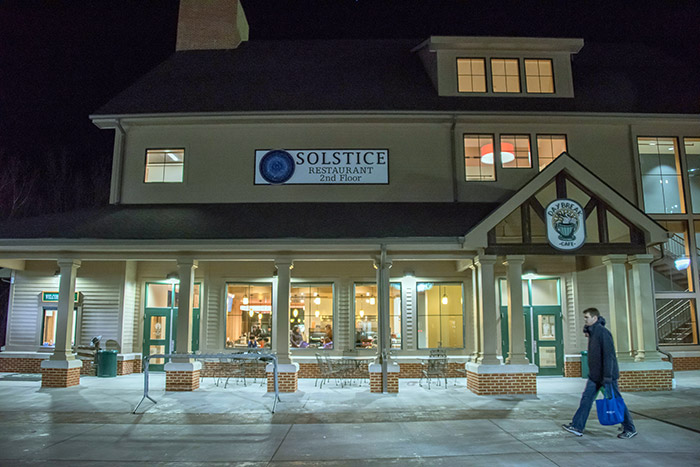 Solstice, a new full-service restaurant, is available on the upper level of Whitetail’s lodge, but has restricted hours. I had planned to eat at Solstice on Super Bowl Sunday, but resort employees indicated that they thought it was closed, so I instead opted for the Mountain Hearth Pizzeria. Being tucked away out of view on the second level, I’m not sure how well Solstice will do. I don’t see myself laboring upstairs in ski boots and warm ski attire for a relaxed lunch. Whitetail is not a destination resort, so when most guests are done skiing, they’re ready to hit the road, where they can pick from a wide range of dining options off of I-70, including excellent restaurants in nearby Frederick. Whitetail has tried full-service dining in the past, and it didn’t work out; time will tell if there’s an audience for Solstice. 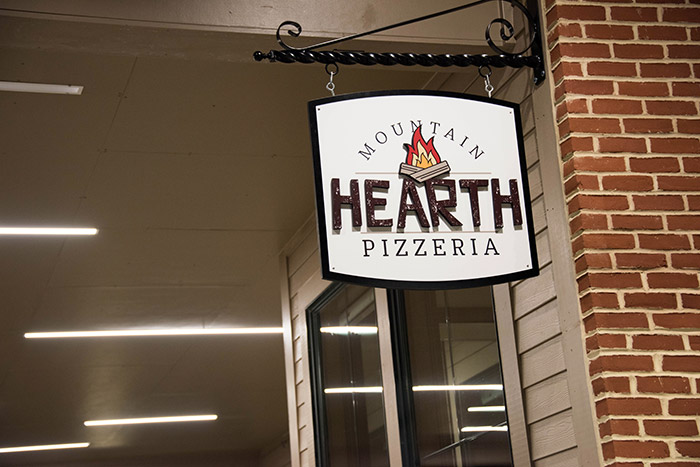 The Mountain Hearth Pizzeria is a welcome addition to Whitetail: it’s just a few steps from the slopes and provides brick oven pizza and other Italian favorites. You can order a range of toppings, and Whitetail gives you an electronic buzzer that will buzz once your pizza is cooked and ready. 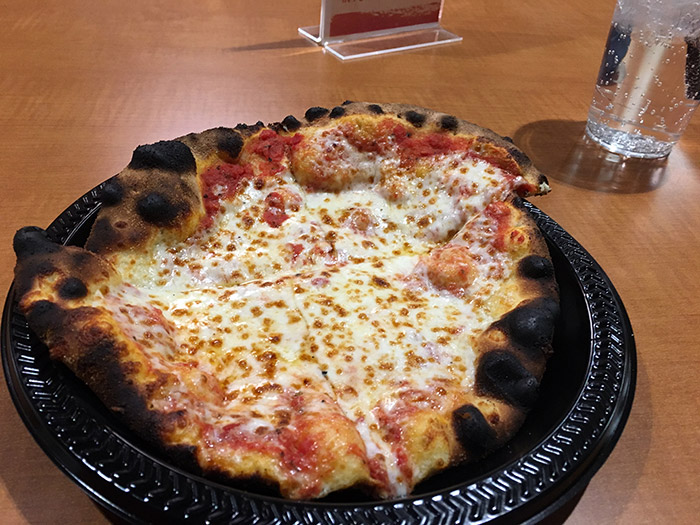 I ordered a pepperoni pizza and a soft drink, although when I went to pick up my pizza, the toppings had disappeared and it was just a cheese pizza. I double-checked the receipt and was only charged for a cheese pizza, so I guess the cashier hit the wrong button when I ordered. It happens. The pizza was… OK. Not bad, not great, just OK. The 8-inch pizza had thin, floppy crust and a fairly thin layer of cheese and sauce that wanted to slide right off as you picked up the pizza, and the outer edges of the crust were not-in-a-good-way extra crispy — a.k.a. burned. I was starving when I began eating the pizza, and still starving when I finished. The total price for the cheese pizza (the cheapest option) and a soft drink was $15.10. Since it didn’t fill me up, I didn’t consider it a good value. Perhaps some toppings would make it more filling, although that jumps the price up further. The final verdict? It’s a nice addition to Whitetail, and feels a bit more premium than standard resort fare. But it’s still resort food, at resort prices; unless you’re sticking around all day at Whitetail and have to eat on-site, you’ll find better pizza at a better price on the way home from the slopes. 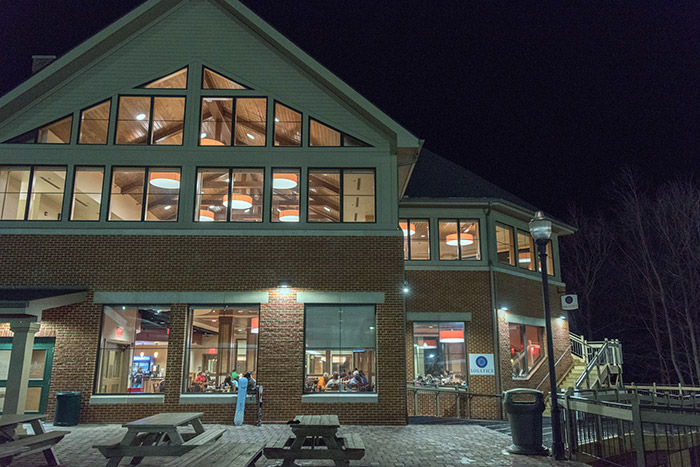 The base area at Whitetail features plenty of seating areas to relax slopeside. Photo by M. Scott Smith.

Whitetail continues to be my “go to” resort in the Mid-Atlantic. It hits a lot of strong notes: excellent snowmaking, a decent vertical, modern lifts, a wonderful base area, and a focus on continuous improvement, reinvesting profits right back into the resort. Granted, these strong points can lead to some negatives: crowds often come out en masse to Whitetail on weekends, making it a zoo; Whitetail is always better on weekdays if you can sneak away from work. 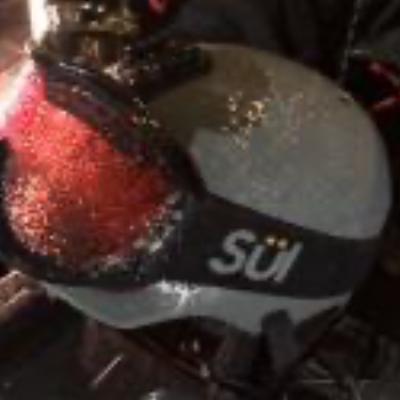 I couldn't agree more with this report. Whitetail is where I grew up skiing and is still my home base. There are many great things about the resort. Family atmosphere, good instruction, wide selection of trails, 1,000 foot vertical, continual investment in the resort; I could go on. On the negative side are the weekend DC crowds (I'm one of them). There are bus loads of skiers on the weekend but that is what helps pay the bills and allows for all of the positives I mentioned previously.

Once they get the food and beverage thing figured out and file for a special exception to the county liquor law, they will be in even better shape.