Brian Eardley, a legendary local boot fitter Ski Center, told me recently that his favorite Utah resort was Powder Mountain. “Powder Mountain?” I responded incredulously. “Why? Isn’t that a smallish hill with old lifts and no grooming?” Brian chuckled and said, “Just try it.”

This season, I visited Utah for a week and a half in late January/early February, but had no intention of heeding Brian’s advice. My goal was to stay in Ogden, and mainly ski Snowbasin with perhaps a side-trip to Alta or Brighton. This was my fourth ski trip to great state of Utah. On my first visit, I skied Canyons (now part of Park City Mountain Resort). Based on a recommendation from DCSki forum contributor, JohnL, I switched to Snowbasin for my next trip and never looked back.

Snowbasin offers everything I want in a mountain: big vertical; over 3,000 acres of terrain; low crowds; high-speed lifts; and magical Utah snow and weather. For the first seven days of our trip, my wife and I couldn’t stop going to Snowbasin. Recent snow and perfect ski temps in the 20s and low 30s made that mountain a dream. Every day, we were making new discoveries and skiing terrain we had never before accessed. We also were enjoying all of our time at Snowbasin — from eating at Snowbasin’s gorgeous lodges (the Asian station at Earl’s Lodge became a new favorite) to chatting it up with locals in the high-speed gondolas. 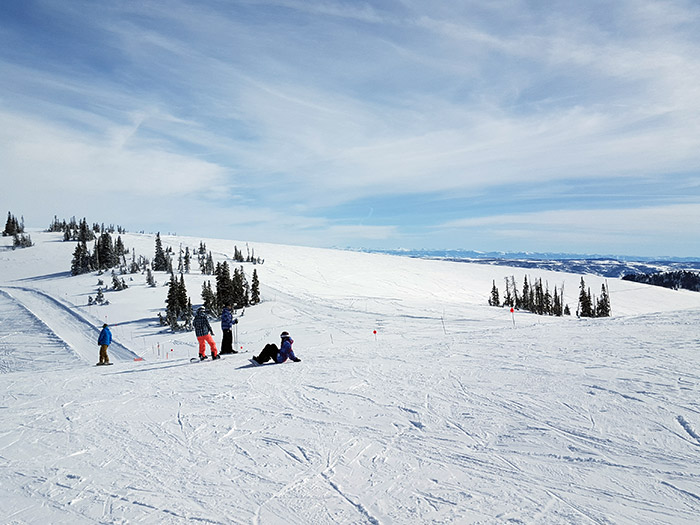 By ski day seven, we were finally ready for some diversity. However, the idea of facing a lengthy rush hour drive through smoggy inversion fog to get from Ogden to one of the Cottonwoods resorts had zero appeal. Salt Lake City has become a burgeoning bee hive of traffic — something my fellow columnist Jim Kinney recently noted in a post on the forum. After seeing some cheap lift tickets for Powder Mountain advertised on the Liftopia app, my wife said, “We should go to Powder.”

I readily agreed and the next morning we made the 33-minute drive from our cozy Airbnb rental (just $88 a night) in Ogden to Powder Mountain in Eden, UT. Many had warned us about the treacherous stretch of road from Eden to Powder, but on this high-pressure morning several days removed from a recent snowfall, we had no problems. In inclement weather, though, we will take the bus, either from Ogden or Eden. 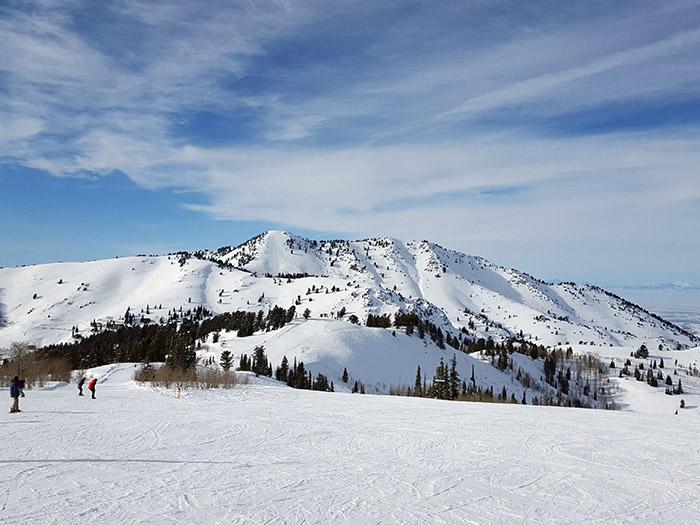 Expecting hard, un-groomed snow, I felt trepidation pulling into the Timberline Lodge parking lot at Powder. Trying to figure out a new mountain is always daunting and Powder Mountain is trickier than most. To my delight, I would barely consult a trail map the entire day. Instead, Roscoe, a mountain host, offered to give us a free tour of the resort. A retired dentist, Roscoe winters in nearby Eden and summers in New Orleans. He proved a font of knowledge about Pow Mow, showing us the entire lift-served area accessible from the Timberline Lodge area.

Surprisingly, all marked trails were groomed to perfection, making the tour effortless. Another surprise was that most marked trails on average were less steep than Snowbasin’s. With that said, steep terrain (including cliffs) exists just a few meters off many trails. Pow Mow boats 7,000 acres of skiing — the most of any U.S. resort — but only 1,200 is lift-served. The rest must be accessed by foot or snowcat. With an average snowfall of 500 inches, Powder also has no snowmaking.

The Summit Group, which recently purchased the mountain, plans to build a new village and install new lifts, but currently the mountain has more of a local resort flavor. At Snowbasin, three high-speed lifts each serve over 2,300 feet of vertical; at Powder, the most lift-served vertical one can achieve is 1,600 from the Paradise fixed-grip quad. The resort’s only high-speed detachable lift, the Hidden Lake Express, covers just 1,300 feet of vertical. Ample expansion terrain promises much more vertical, but Summit must first purchase and install the lifts. 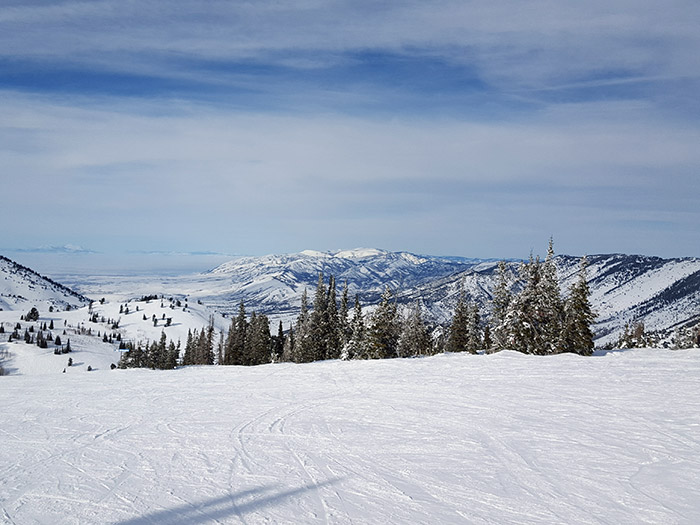 What Powder lacks in lift-served vertical, it more than makes up for in acreage and good vibes. 1,200 acres accessible by lifts is still 12 times the skiable acreage of West Virginia’s Timberline Four Seasons Resort — a resort I have held a season pass at for 14 years and still find interesting. Roscoe pointed out easily accessible off-piste terrain where skiers and snowboarders of varying ability levels can access powder after a snowfall. Pow Mow has a lot of low-angle powder fields just off trail — perfect for East Coast hardpack skiers like me to better develop our powder skills.

We skied with Roscoe longer than expected, even getting over to one of the steeper marked pistes at the resort, the black Snowchaser run off the Paradise Quad. After some quick tacos at the Hidden Lake Lodge, we took a shuttle over to Sundown to ski that area — a fun diversion similar to the North Face trails at Seven Springs or Silver Creek at Snowshoe. The remainder of the day was devoted to the Timberline, Paradise, and Hidden Lake areas. I even got some Poma time, riding the sunrise platter tow to access Mushroom Valley, Dr. C, and other terrain on that side of the mountain.

Pomas never cease to fascinate me. I love the idea of skiing both up the hill and down, and while I am no master of these beasts, my skills have slowly improved over time. I skied my last runs of the day at Paradise. Seeing me taking pictures off Snowchaser, a Ski Patrol member whizzed by and said, “This is one my favorite views in Utah.” I replied, “This is one of my favorite mountains in the state.” Whether you are a skier, a snowboarder, or free of heel, you will love Pow Mow. It is indeed a special place. 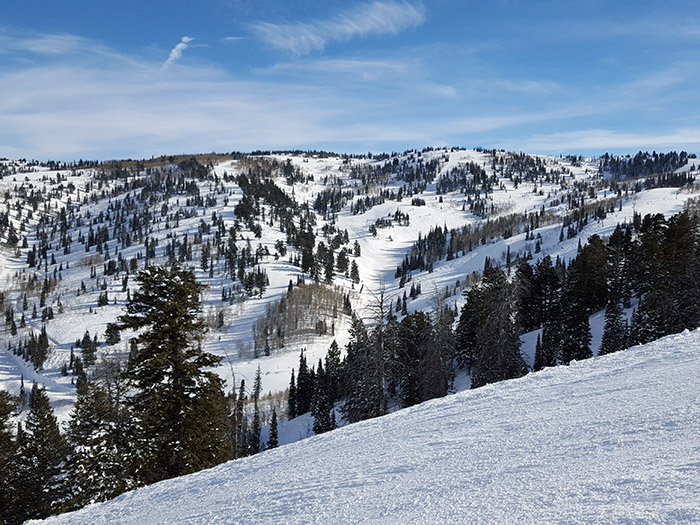