It’s not too easy to run a ski resort in the Mid-Atlantic. Some winters bring banner amounts of snow, while others bring 70-degree days in the middle of January. With natural snow a wild card for all but the highest-elevation resorts, local ski areas live or die based on the amount of artificial snow they can make — and that requires low temperatures and low humidity. With another El Niño weather pattern settling into place, long-range forecasts suggest this could be a challenging winter for many Mid-Atlantic skiers and resorts.

As first reported by DCSki in 1998, the El Niño weather pattern begins when winds off the west coast of South America weaken. This leads to a disruption of the ocean-atmosphere system in the Tropical Pacific, which sets off a chain reaction of events that can have important consequences for worldwide weather and climate. El Niño can cause some parts of the country to be milder or colder than average. According to scientists at the National Oceanic and Atmospheric Administration (NOAA), we may face one of the strongest El Niños on record during the 2015-2016 winter season.

“A strong El Niño is in place and should exert a strong influence over our weather this winter,” explained Mike Halpert, deputy director of NOAA’s Climate Prediction Center. 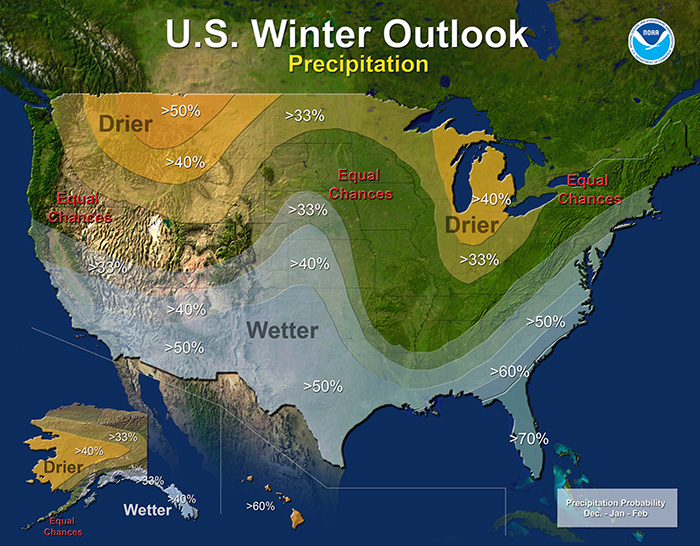 Mid-Atlantic resorts may see more precipitation than average. Resorts are hoping it won’t come in the form of rain. Image provided by the National Oceanic and Atmospheric Administration.

NOAA is predicting that wetter-than-average conditions are most likely to occur in the Southern Tier of the United States, from central and southern California, across Texas, to Florida, and up the East Coast to southern New England.

Wetter-than-average can mean more snow than average, if temperatures remain low. And that’s where things start to look a little bleaker for the Mid-Atlantic. From the center of West Virginia and Virginia south, temperatures this winter are expected to remain average, decreasing to below average as you go further south into Florida. Unfortunately, Florida doesn’t have any ski areas.

Going north from central West Virginia, temperatures are expected to be warmer than average, with temperatures rising the further north you go. This could be bad news for ski areas in the Mid-Atlantic and New England. 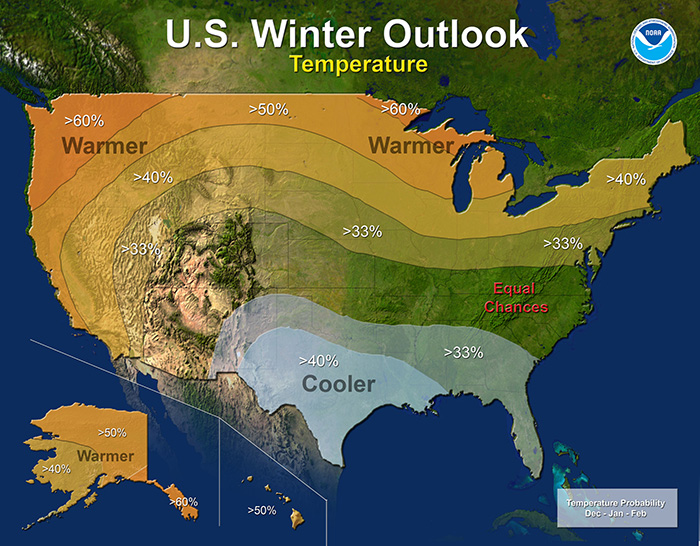 NOAA is predicting warmer temperatures than average for many parts of the Mid-Atlantic region. Image provided by the National Oceanic and Atmospheric Administration.

The Capital Weather Gang isn’t predicting a snowless winter. In fact, they think the chance of at least one blockbuster snow event might be slightly elevated than in a typical year, although it’s still unlikely to occur. Instead, they suggest we should look forward to plenty of rain and mixed precipitation.

The possibility of a strong El Niño brings back bad memories for many Mid-Atlantic Resorts. For example, El Niño was not kind to local resorts during the 1997-1998 winter season. Milder temperatures, coupled with rain, kept slopes brown for much of the season. Some resorts — such as Snowshoe Mountain Resort in West Virginia — fared quite well due to its high elevation and southern latitude, while others suffered.

Things were bleak during the 2006-2007 winter season, another El Niño year. As reported by DCSki at the time, after a couple cold weeks at the beginning of December, cold weather disappeared and slopes began melting quickly. With temperatures touching the 70s in early January, 2007, the already-abbreviated Mid-Atlantic ski season was starting to look like a bust.

On the plus side, local resorts have invested millions of dollars in recent years to improve artificial snowmaking. New, automated snow guns operate with greater efficiency and can produce a larger amount of snow in a shorter period of time than previous-generation guns. Resorts can lay down a fair amount of snow with just a few nights of sub-freezing temperatures.

Winter in the Mid-Atlantic is fickle and hard to predict, and El Niño is setting the stage for another hard-to-predict winter. DCSki will track conditions throughout the winter, and readers should post their own observations and trip reports in the DCSki Forums to help local skiers and snowboarders find the best snow.

There are many factors, and in the article I pointed out that high-elevation resorts in West Virginia, such as Snowshoe, fared well while others suffered.  Lower-altitude resorts in the Mid-Atlantic have struggled during El NiÃ±o years.  As NOAA points out, El NiÃ±o shifts probabilities around from historical norms.  Much of the Mid-Atlantic is right on the fine line between snow and mixed precipitation so a subtle shift in probabilities can have a profound effect.  But, as long as nighttime temperatures remain near or below freezing to allow snowmaking, local resorts should do OK.

fishnski
November 17, 2015 (edited November 17, 2015)
Member since 03/27/2005 🔗
3,530 posts
With that being said Scott, Mountain Managers..marketing..ect..at the higher snowiest areas....Snowshoe on up thru Canaan and into the PA areas should take notice and to prepare for and take advantage of the heavier ski traffic from the displaced lowland skiers.....Take notice canaan!! 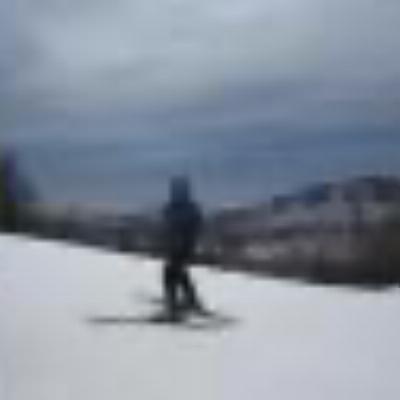 Historical perspective. In 20 years, there has only been  1 year where snowmaking was very marginal. At that time, Snowmaking required more setup labor time, No real time weather. Today newer nozzles, automation, product management ( only do half width trails) more air and water capacity etc. should do it's job.

Depending on the person, Temps super low keep people away. I like 25-28 degrees, low humidity and no wind.

The too cold part is true...High elevation is a bitch also...Ive always said...NE is too Cold...CO is too high (specially now!)...but WV is just right!.....the problem with WV is the fact that they didnt use the best mountain or two and settled for the easier builds from years ago...