A busy winter season has led directly into a busy summer season at Pennsylvania’s Whitetail Resort. The ski area has already begun its capital improvement program for the 2015-2016 winter season. Before next fall, $2.5 million will be spent on various upgrades and enhancements.

“We continue to improve and expand our facilities and programs at Whitetail Resort to better meet the needs of our guests,” said Don MacAskill, President and General Manager of Whitetail Resort.

In recent years, Whitetail has gradually replaced aging snowmaking infrastructure with state-of-the-art Techno Alpin Fan Guns. The energy-efficient, automated guns allow Whitetail to more effectively cover slopes. After covering trails such as Angel Drop, Snow Dancer, and Fanciful with Techno Alpins, Whitetail is now focusing its sights on the Exhibition black-diamond trail. The resort reports that 17 Techno Alpins will be installed along Exhibition. The resort is also adding new automated HKD air/water guns to its arsenal to hit areas that are harder to cover. These air/water guns will replace older guns that had to be manually adjusted. 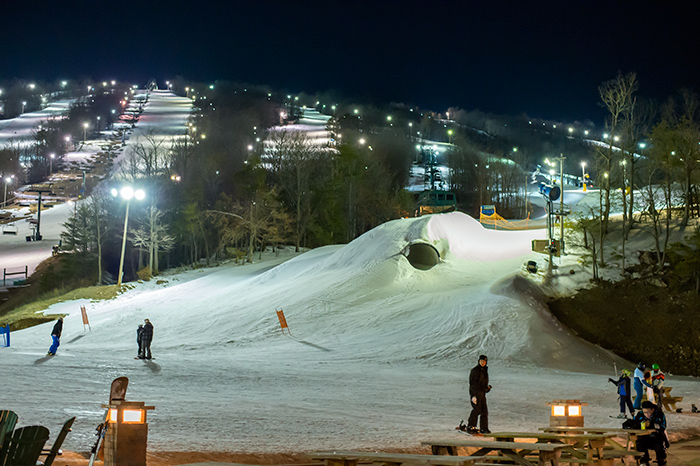 Whitetail is expanding its inventory of rental equipment to accommodate growth in its beginner programs. Whitetail will also be purchasing new skis, boards, and boots to support customers taking advantage of the resort’s full season lease program.

Whitetail began paving some of its parking lots last summer, and its multi-year paving renovation program continues this summer. Whitetail notes that Lot 1 will be fully paved before the next ski season, along with the road leading to Whitetail’s snow tubing park.

Although Whitetail has not yet announced specific plans, the resort has enlisted the assistance of local engineering and architectural firms to explore expanding several areas of operations at the resort.

Whitetail’s summer season is already underway with activities such as the Whitetail Golf Resort and Dusty Wissmath’s Fly Fishing School. Whitetail will once again be offering Summer Adventure Kid’s Camps.

Whitetail is fun but i just found that i prefer liberty just beckause you can lap trails vs wt where u have to wait for 15+ mins. I still go but if rt or lib are possible I chose those

Antoine: If you can sneak away to Whitetail on a midweek day, the resort is often empty with no lift lines.  It's a wonderful time to go.  On weekends, Whitetail can be quite crowded.

I agree with Scott...if you are looking to run laps, whitetail midweek with the high speed quad and 900 feet vertical is great...I've done  30 runs in under 4 hours there on several occasions.

That being said I'm very intrigued by the comment about them hiring engineers, interested in what they are expanding. I don't know where they would put it....but new terrain would be amazing. For southern PA they have some great vertical and I know they have had issues acquiring more land and I don't know what they own currently, but I'll be optimistic on this one and hope to hear more on this possible expansion.

I suspect the expansion they're talking about may be in base area facilities, although I'm not certain.  When Whitetail first opened they had a long-term plan that showed trails being cut on the backside of the mountain (straight ahead when you get off the Whitetail Express), but I'm not sure those plans were ever realistic and haven't heard any renewed talk of them recently.  I'd love to see more creative trails like Sidewinder or Ledgewood, but I don't think there are too many opportunities to add additional terrain at this point on the front side.

I'll certainly pass on any updates I hear.

I heard the problem with the back side is that it has several boulder slides (when roundtop was built the whole hill was covered in them) and that it bottoms out rather fast. You cant forget the legend about the stingy old farmer in the back in te next valley over who owns the land but dose not want to sell it. I also talked to guy at wt that said "more likley then not any new trails would have to be cut along the acsess road that lead to sidewinder" i personally dont like the idea because that area has a worse acorct then the rest of the mountain.