On Tuesday night, January 27, 2015, I finally made it up to Blue Mountain for my first ski trip of the year. Conditions were good with a few inches of powdery real stuff on top of a thick base. The lower terrain park and upper park on Sidewinder were both open with big “wave” jumps. I went with a friend that is learning, so it was nice to take it easy for the first day out.

We mostly stuck to Paradise which had the most consistent powder coverage, which was great for carving. I took a few runs over the terrain park waves — woo-hoo! Later in the evening the wind picked up, and there were small icy spots exposed in the well-traveled areas of the trails. Some mini-drifts formed on the upper rim of Paradise, which were nice for hopping. 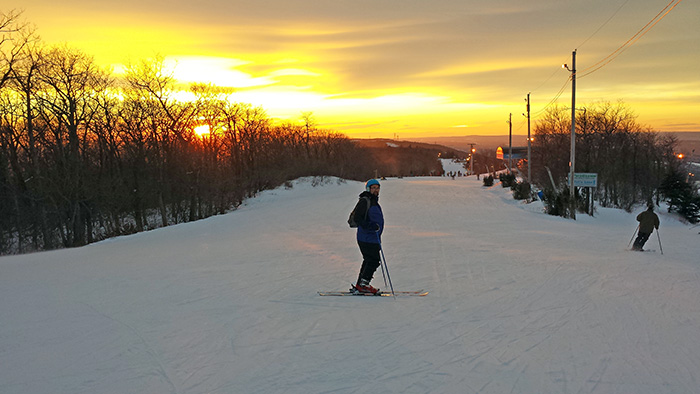 Overall, conditions were great for weeknight skiing. The lift attendants were a bit lazy, though, with maintenance of the pickup and landing areas of the high speed lifts. These areas became a solid sheet of ice and the boards and plastic were becoming exposed on the lip. I had to watch for more wiped-out skiers and snowboarders at the top of the lift than usual.

There weren’t many people at Blue Mountain considering we had a few inches of fresh snow earlier in the week. We stuck to the quad and had no lines until it closed around 8 p.m. Then we switched to the 6-pack lift, which had a small line since it’s more convenient for snowboarders, being closer to the upper terrain park, but the line went quick.

Overall, a good trip and conditions should keep improving with sub-zero temps and more natural snow on the way.

When he isn't skiing, Matt Lees is an engineer residing north of Philadelphia, PA.

Very nice! I heard they have some glades up there...