My son Vince and I made a visit to Lake Placid, NY in late March 2014 to ski nearby Whiteface Mountain. In so many ways it was like traveling back in time. We pulled into Lake Placid on the evening of March 20th. Earlier in the day we’d been skiing in mild spring conditions at Hunter Mountain, 200 miles to the south. While we dined at the Lake Placid Pub and Brewery that night, an intense snow squall pummeled scenic Mirror Lake, just outside the window. It looked and felt like the calendar had rolled back a month or more to mid-winter. 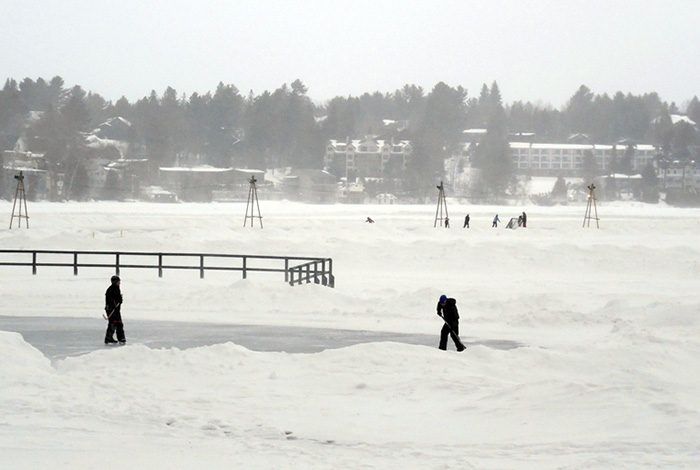 Mirror Lake and the town of Lake Placid. Photo by Jim Kenney.

I had skied Whiteface twice before in 1971 and 2000, but it wasn’t until this trip that I finally got to see the town of Lake Placid, site of the 1932 and 1980 Winter Olympics. The town was hopping for a weeknight in March and after dinner we took a quick spin down Main Street. Lake Placid is impressive and has the look of a classic old winter resort featuring a main drag lined with many shops, hotels, restaurants, and several Olympic winter sports venues still in regular use. It was the eve of the ECAC college league hockey tournament, and team buses and fans were pouring into town. Union College, NY went on to win the ECAC title during that visit to Lake Placid and a few weeks later captured the school’s first NCAA Division I Men’s Ice Hockey Championship.

The next morning we made the approximately ten mile commute over to Whiteface Mountain Ski Area. When you get close to a spectacular piece of geography like Whiteface Mountain (4,865’ true summit), you get a feeling of timelessness. No construction or embellishment by us puny humans will ever fully tame this place that rises in singular prominence amidst the magnificent Adirondack High Peaks. In simple terms the trail layout features three “peaks”; from looker’s left to right they are Little Whiteface (elevation 3,676’), the Whiteface Summit (elevation 4,386’, highest lift served terrain in the Northeastern US), and Lookout Mountain (elevation 4,000’). From the base area (elevation 1,220’) we started our day by riding the Cloudsplitter Gondola (2,432’ vertical) to the summit of Little Whiteface. Our introductory run was on an intermediate trail called Excelsior with a wild mix of six inches of powder from the overnight squalls to sections that were windblown and bony. Welcome to Whiteface. 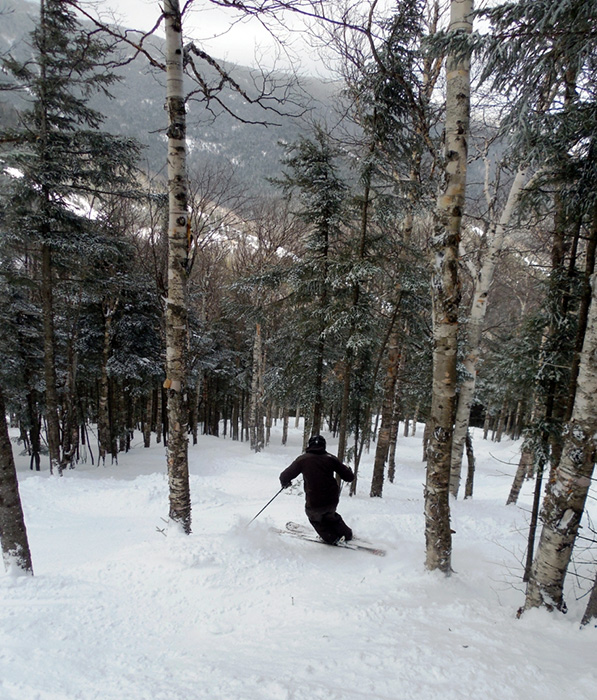 The area had received approximately 18” of new snow about a week before our visit and conditions were generally quite good, including many fun glades with plenty of natural snow deep into March. We enjoyed more powdery groomers and a bump run called Approach. While still in the Little Whiteface trail pod we skied the easy 10th Mountain Division Glades while following an instructor giving a tree skiing lesson to a family group. Nearby we also took a more challenging run through the beautiful Cloudsplitter Glades that featured a gnarly, little icefall on the day of our visit.

Then we climbed 1,830 vertical feet on the Summit Quad Chair to the highest lift-served point at Whiteface where the springtime temperature was a balmy 8 degrees on the morning of March 21st. From there we skied Cloudspin, a run used in 1980 for the start of the Men’s Olympic Downhill course. It was a fairly heroic groomer with a few sections of moguls on the day of our visit. But we were anxious to sample the three peaks of the layout and moved on to Lookout Mountain. 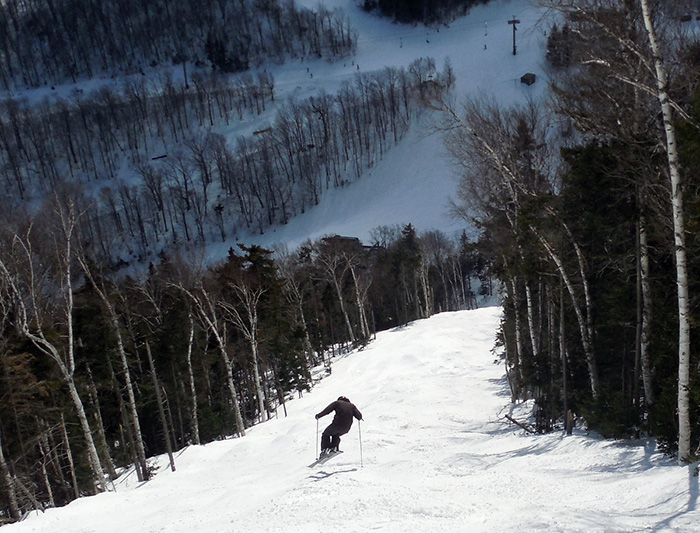 Lookout Below. Photo by Jim Kenney.

Lookout Mountain is a newer trail pod at Whiteface that opened in 2009 and is served by the Lookout Mountain Triple chair (1,560’ vertical). Here we skied a very long blue square groomed run called The Wilmington Trail with great views of Lake Champlain. Taking it from the top of Lookout Mountain to the Whiteface base area provides 2,780 vertical feet of scenic cruising. Then we skied a good, steep bump run with excellent snow cover called Lookout Below. It had a spine of snow running down the middle that reminded me of the manmade whales often seen on The Drop trail at Timberline ski area in West Virginia. 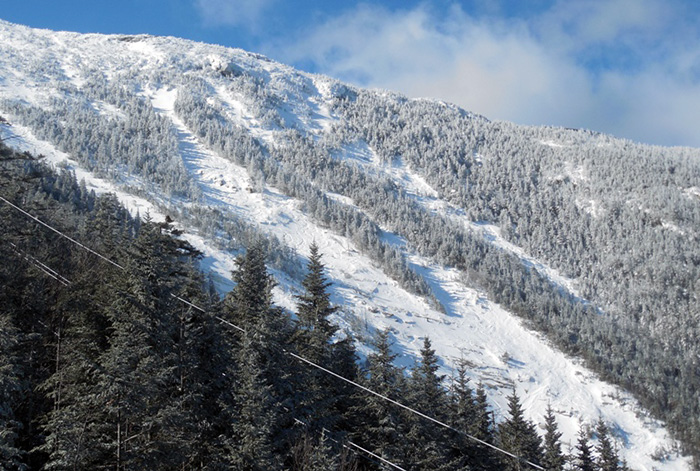 The Slides. Photo by Jim Kenney.

We ate a bag lunch at the mid-mountain Boule’s Bistro. In the afternoon the sky cleared and we were treated to the superb scenery of Lake Placid and distant Adirondack peaks, including 5,000 footers like Mt. Marcy and Algonquin. On our way back to the summit we got a clear and close-up view of The Slides, an awesome extreme zone at Whiteface featuring some of the burliest ski terrain in the East. This zone was open, but avalanche beacon, probe, and shovel were required to enter, which we did not have. No way you tackle The Slides in mindless tourist mode. These are very steep and icy chutes serrated by sizable cliff bands that are best explored by skilled visitors with the aid of experienced local guides. 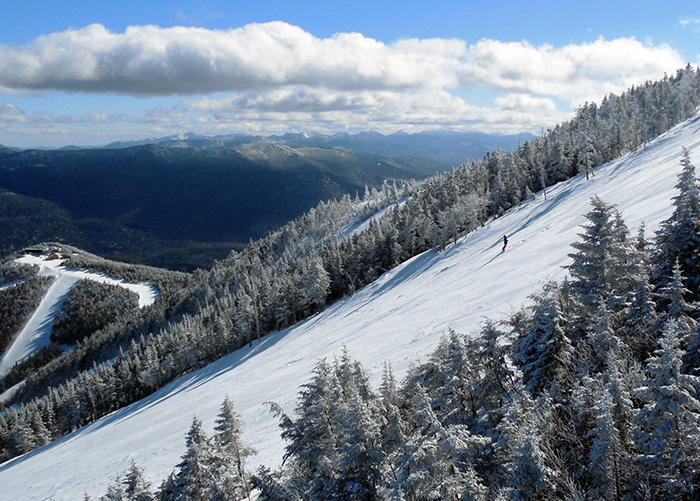 Later from the summit we skied Skyward, the Women’s Downhill course during the 1980 Olympics. It’s maintained as another steep groomer, but not so difficult that a recreational snow rider can’t fantasize the clock has rolled back and they’re challenging the legendary Annemarie Moser-Pröll for Olympic Gold. We also rode the steep Freeway lift tucked into the looker’s lower left corner of the mountain and joked that this underused double chair from the distant past serves killer terrain and vertical (1,458’) that would RULE in the mid-Atlantic. Our last run of the day was a memorable cruise from the Whiteface Summit starting on The Follies trail for 3,200 vertical feet of gorgeous Lake Placid and Adirondack High Peaks scenery all the way to the foot of the mountain. Whiteface is a winner; past, present, and future.