My wife, Gloria, and I participated in a week-long group trip to the Telluride Ski Resort in January, 2014. We’ve been to Colorado on several occasions, but this was our first trip to Telluride and we were excited about visiting the world-famous town and resort. While my wife was looking forward to skiing in the Rockies, I wasn’t interested in multiple ski days on the slopes. So, as she was enjoying her skiing days on the mountainside, I spent some of my free time exploring a variety of interesting alternative activities in the Telluride area.

There are two scenic trails that are easily accessible from town and both led to frozen water falls. The trail to Cornet Creek Falls was the easiest trail to reach since it starts at the top of Aspen Street, which was a short walk from our hotel. The trail is approximately half a mile to the falls across steep and rocky terrain, but the view of the falls, the box canyon, and the town is definitely worth the effort.

The trail towards the base of the falls was blocked by ice and snow, so I followed a faint, narrow path up the red rock face, which took me higher than I had planned and allowed me to view the falls at almost eye level. I didn’t run into any wild animals, but I did encounter a campsite (but no camper) on an isolated rock ledge, so I altered my hiking path to maintain a respectful distance. 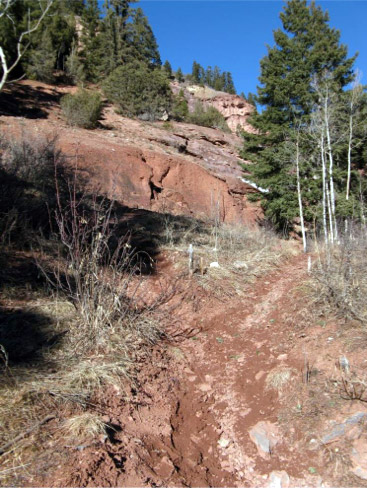 The trail to the falls can be seen in the lower right-hand side of the photo. The mystery camper was located near the rock face in the upper-center section of the photo. Photo by Gary Serrao. 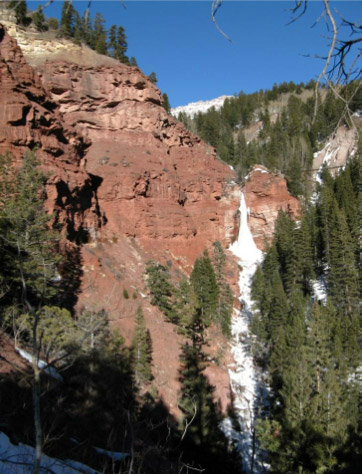 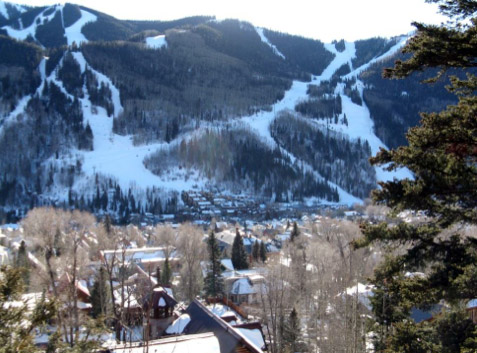 The view across the Telluride rooftops from the trail to Cornet Creek Falls. Photo by Gary Serrao.

The Bear Creek Trail is a very popular trail that we accessed at the end of Pine Street after a short walk from the Telluride gondola base station. This trail is wide, marked very well, and ends about 2.5 miles later at the falls. It follows Bear Creek through a narrow valley with beautiful scenery on all sides.

We started somewhat late in the afternoon, so we encountered a number of hikers who were completing their outings and returning to town. Since this was winter we also had to be aware of skiers and snowboarders who were also using the trail to head into town. The hiking is fairly easy, but we did feel the approximately 1,000-foot change in elevation as we made our way to the falls. Again since this was winter, the trail narrowed considerably to a single file path in almost knee-deep snow near the falls. A misstep on either side of the trail would have landed us in deeper snow or the creek that occasionally crossed the trail. Also, there is no cell phone coverage near the falls, which could produce anxious moments for those who need to stay connected to the outside world.

While the hike contained many awe-inspiring sights, the actual waterfall was a little bit of a disappointment. It was late in the afternoon and the sun had moved behind a mountain ridge, so the falls were in a deep shadow, which produced a muted scene. The snow depth and the absence of a clear path also prevented a closer approach to the falls, which would have been easy in warmer weather. 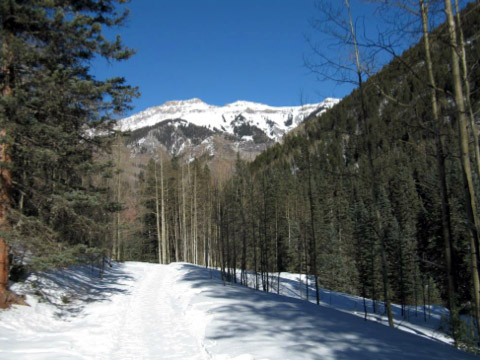 A view from Bear Creek Trail looking toward the direction of town. Photo by Gary Serrao. 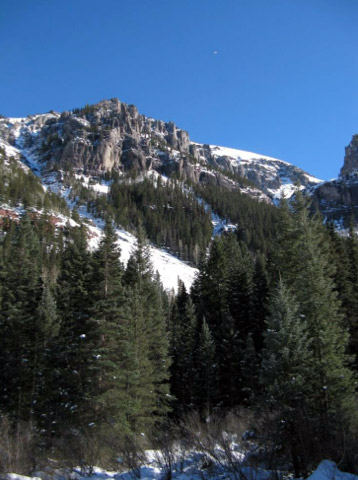 We are on our way to the way to the falls. The white speck in the sky is a para-glider. Photo by Gary Serrao. 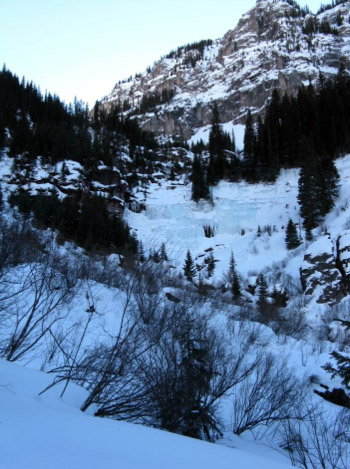 Bear Creek Falls is in the center of the photo. Photo by Gary Serrao.

The snowmobiling adventure started with a complimentary pick-up near our hotel followed by a short ride to the snowmobile base outside of town. I was very fortunate since the other members of the snowmobile tour group cancelled at the last minute; as a result, I was given the opportunity for a personalized tour of the countryside in the Alta Lakes area near Bald Mountain.

Anyone can try this snowmobiling activity, even an east coast novice like me. After an introductory safety briefing, our 2-hour tour included spectacular scenery, local history, and speeding through alpine meadows at over 30 mph! My familiarity with jet skis helped me get comfortable with the snowmobile since the controls for both machines are in the handles. The big difference is my snowmobile had brakes, which were very handy during the tight turns in the forested areas. The other big difference is a jet ski will plane along the water’s surface for a generally smooth ride, while my snowmobile transferred all the trail bumps from the front blades through to the handles. There is no power steering in a snowmobile, so a little bit of upper body strength was required to maintain control, and I certainly felt the effects in my arms and shoulders.

Riding near frozen lakes and majestic peaks, crashing through snow drifts, touring a ghost mining town, and traveling through towering pine forests are memories that I will always treasure. The only drawback, and this is really the only issue, is my clothing smelled like engine exhaust, which was easily solved by an overnight airing out. 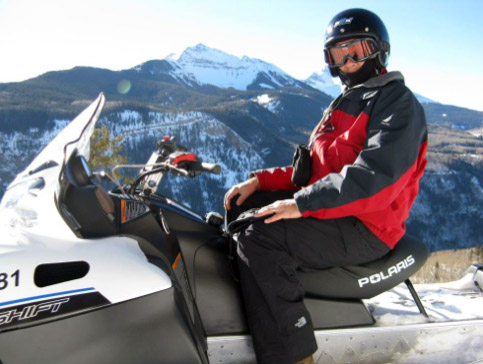 Yours truly with Mt Wilson (left) and El Diente (center) in the background. Wilson Peak is behind my helmet. Photo provided by Gary Serrao. 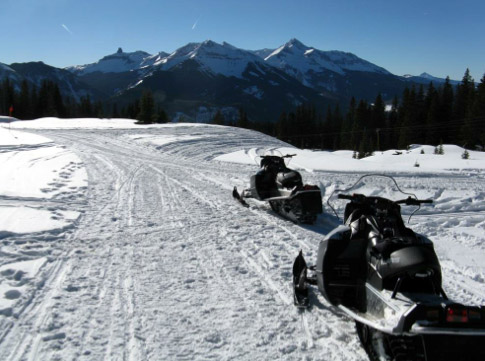 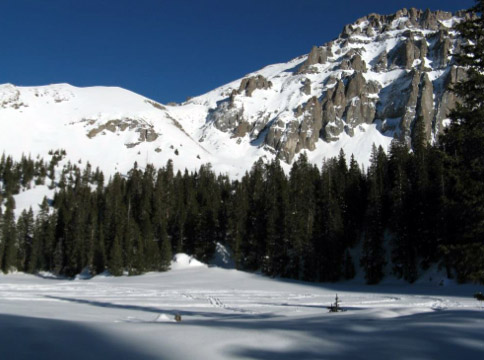 We are near the Alta Lakes. Palmyra Peak is on the right. Black Iron Bowl and Prospect Bowl are behind the ridge in the center of the photo. Photo by Gary Serrao.

I met my pilot, Glider Bob, at the Telluride airport and received a short, but very helpful briefing on being a good glider passenger (basically, stay buckled, ask questions, take lots of photos, but don’t touch anything in the cockpit).

There is a small engine with retractable propeller blades in the cowl, so we maneuvered along the taxiway, took off, and flew toward Palmyra Peak just like an airplane. It was easy to forget that I was in a glider since we were maneuvering over Revelation Bowl (with the members of our ski club down below) and had climbed to the same altitude as Palmyra Peak. I was enjoying the view all the way to Utah!

As we circled over Prospect Bowl, Glider Bob explained the beeps that I was hearing were a function of the altimeter and were meant to aid the pilot in maintaining the glider’s altitude. As long as the altimeter generated beeps, that meant the glider was gaining altitude. A rapid ascent resulted in a rapid sequence of beeps. A slow ascent produced a slow sequence of beeps. No beeps meant, well, no altitude gain. It was at this point that Glider Bob shut down the engine. As I watched the propeller blades disappear into the cowl I was quickly reminded that I had paid for a glider flight. The steady hum of the engine was replaced by the gentle sound of the wind whistling past our Plexiglas canopy.

I have to admit that gliding at over 12,000 feet was an exhilarating, jaw-dropping, and fairly quiet experience, except for the reassuring sound of the beeps from the altimeter, which I tracked very, very intently. As we rode the air currents around Prospect Bowl, we joined a para-glider who was floating over the area above us. Glider Bob easily navigated the air currents while waving to the skiers below and watching for the para-glider above us. I was definitely in the company of a pro, which made me feel better since we were gliding around 12,000 feet without any power.

I easily spotted the town of Telluride as Glider Bob pointed out many of the physical landmarks in the area such as Bald Mountain and the Alta Lakes, and many of the ski resort features such as the restaurants and the various lifts. As we returned to the airport, we were put into a holding pattern near the runway because of some aircraft traffic congestion, and circled over a number of multi-million dollar homes including Oprah Winfrey’s former estate (it looked so modest from several hundred feet in the air).

We glided in for the landing after a roughly 40-minute flight (a few minutes longer than planned due to the holding pattern near the airport). Glider Bob was an excellent pilot and a very hospitable tour guide. This was definitely a bucket list adventure and I would certainly do it again. However, I would not recommend it for anyone who suffers from claustrophobia or has any anxiety about heights. 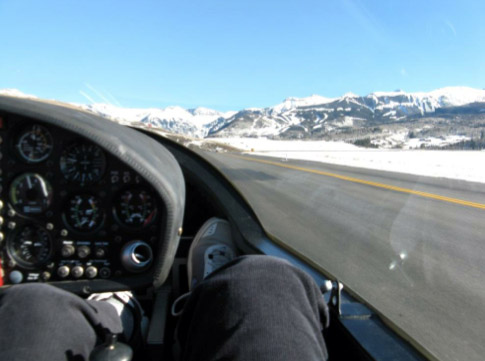 We’re taxiing along the airport runway prior to take-off. The seating was cramped, but comfortable, and I had a front-row view of all the piloting action. The ski trails can be seen in the center-right of the photo. A section of Prospect Bowl is at the far right of the photo. Photo by Gary Serrao. 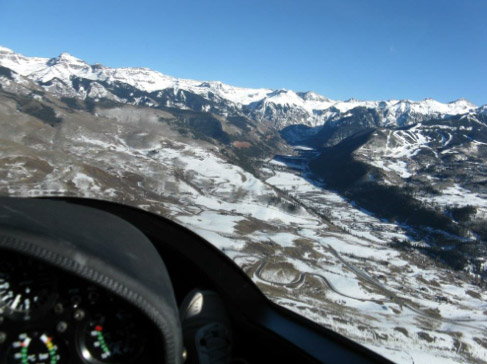 We’re above the airport and are looking toward the Telluride box canyon. The resort is on the right side of the photo. Some of the multi-million dollar homes are directly below us. Photo by Gary Serrao. 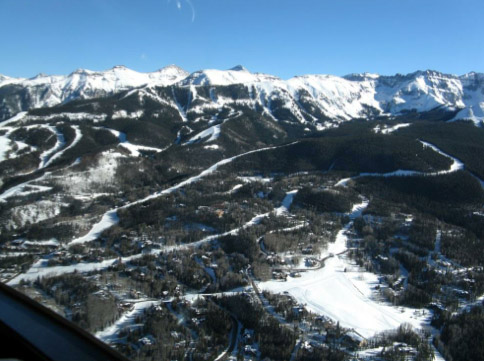 This is an example of the amazing scenery. Prospect Bowl, Palmyra Peak, and a portion of Bald Mountain can be seen on the right side of the photo. Photo by Gary Serrao. 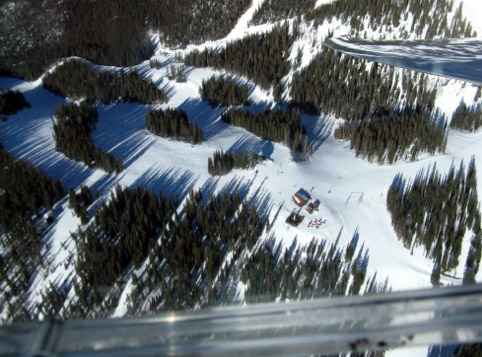 We are turning over the Bon Vivant Restaurant. A section of the glider’s wing can be seen in the upper right part of the photo. Photo by Gary Serrao. 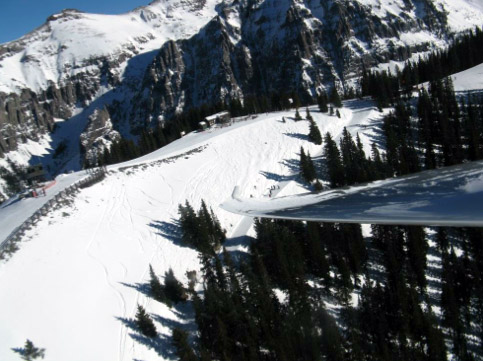 Giuseppe’s Restaurant is at the center of the photo. A section of the glider’s wing can be seen in the right part of the photo. Photo by Gary Serrao. 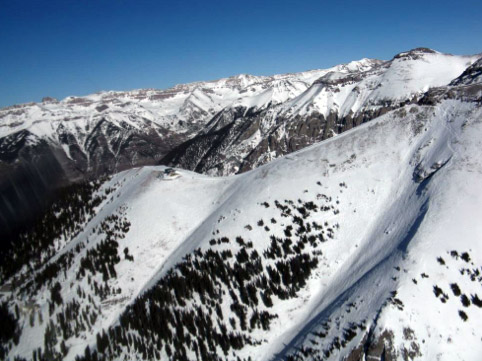 The Gold Hill Express (Lift 14) is near the center-left of the photo and the Revelation Lift (Lift 15) is uphill and near the right side of the photo. Photo by Gary Serrao. 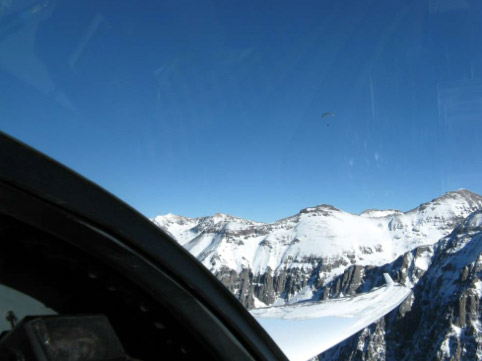 We are near Prospect Bowl and the para-glider can be seen just above us (just a little bit to the right of center in the photo). Photo by Gary Serrao. 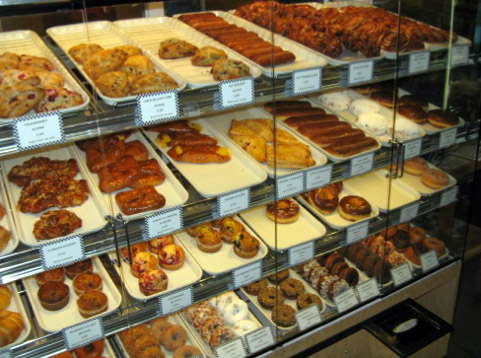 A selection of the breakfast items at Baked in Telluride on South Fir Street. A week just wasn’t enough time to sample all the offerings. Photo by Gary Serrao. 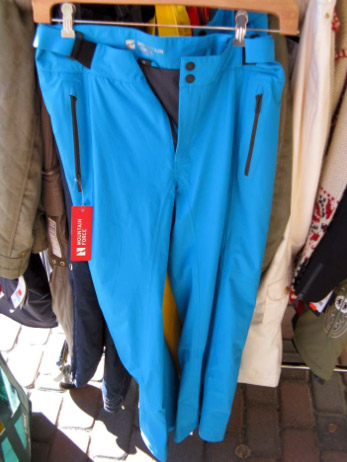 These ski pants were on sale for $320 reduced from an original price of $500! It would have been a bargain if a pair of skis was included in the deal. Photo by Gary Serrao. 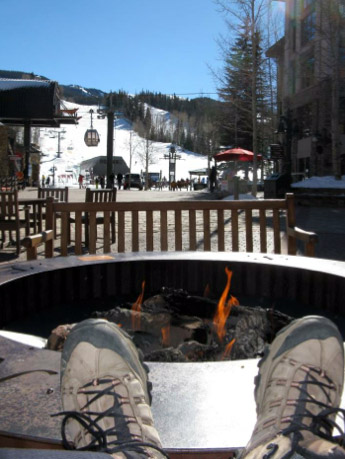 On a number of occasions, I preferred a slightly more relaxing activity at the resort, so I would spend some time chilling by the fire pit in the Mountain Village. Photo by Gary Serrao.

Gary Serrao enjoys traveling with his wife, old muscle cars, good BBQ with friends, and the occasional ski day on the slopes.

Great story, thanks.  Makes me want to go there.  Telluride is one of the few North American ski areas I have not been to.