I have skied in the mid-Atlantic every winter since 1967. I know April skiing can be had in our region on occasion at places like Snowshoe and Seven Springs, but in all my years I had personally never before skied locally in the 4th month of the year. I spent Saturday, April 5, 2014 at Wintergreen Resort near Charlottesville, Virginia with six friends and we all considered this bonus day of skiing a beautiful spring gift from Wintergreen. 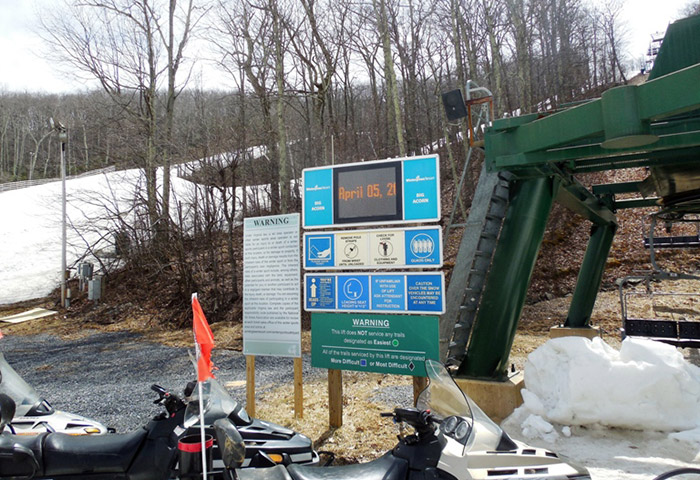 Proof of April skiing in Virginia. Photo by Jim Kenney.

And what a day it was: about 45 degrees, plenty of slopes open in all the main trail pods, modest crowds, little wind, deep blue skies, and just a great time. Before we made the final climb to the ski area we saw a large group of cyclists gathering for a ride near the Devil’s Backbone Brewery some 2,300 vertical feet below the ski resort’s parking lot. Many early blooming trees in the area were sporting beautiful white flowers. The juxtaposition was weird, but wonderful. When many winter sports enthusiasts had given up the ghost for this ski season, Wintergreen offered up one last blast of maximum fun. 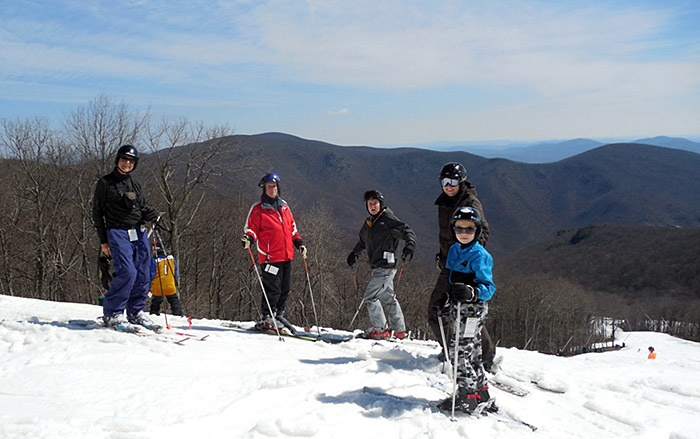 Our morning ski posse consisted of five guys ranging in age from pre-teen to 73. We were quickly befriended by a local boy named Austin who helped us fill out Wintergreen’s magnificent six-passenger Blue Ridge Express Chairlift. Austin was the grandson of a Wintergreen Ski Patroller and basically acted as our private mountain ambassador for about 90 minutes.

He started by guiding us through the ski-tunnel that leads from the main ski hill centered around the Blue Ridge Express to the intermediate-advanced Big Acorn Quad Chair Trail Pod. We had a lot of fun there skiing four or five different runs, each with about 500’ of vertical. 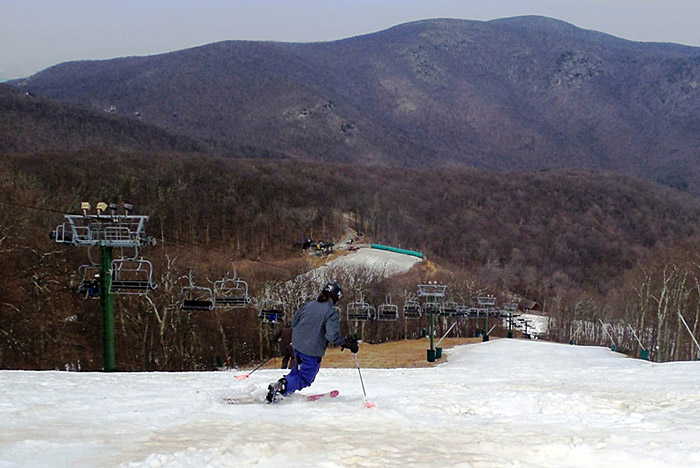 Then we headed back across the mountain and went to the advanced Highlands Trail Pod. Only one trail was open — Cliffhanger, but it’s a good one with approximately 1,000 feet of vertical and a couple of easy black diamond drop offs. The snow was copious on Cliffhanger, but already pretty heavy with lots of slush piles to navigate. But hey, nobody was complaining. It was April! 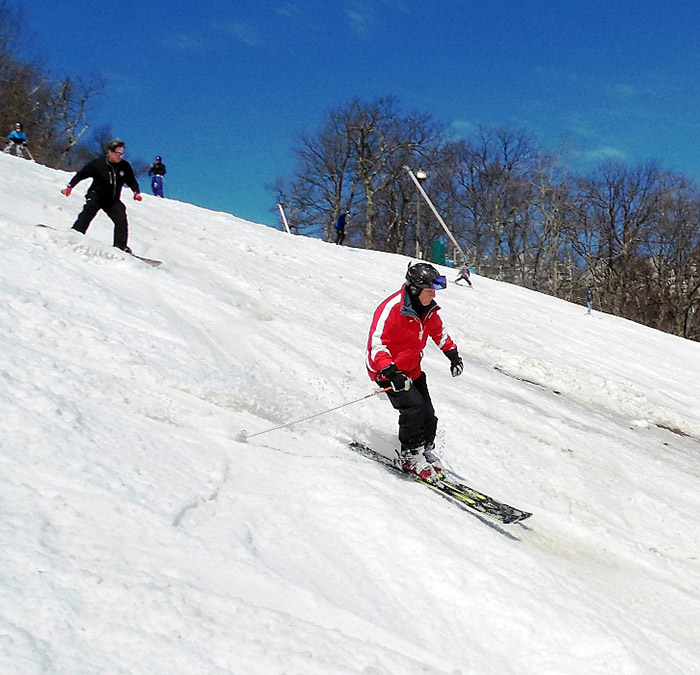 The Colonel leading the way down Cliffhanger. Photo by Jim Kenney.

After skiing Cliffhanger we made a few passes through the robust Wintergreen Terrain Park. It’s loaded with rails, tables and several large gap jumps. There is also a smaller park that parallels the big one. We fooled around in the smaller park, but the best part was watching several skilled snowboarders throwing very cool barrel roll type aerial moves off some of the hits in the big park. 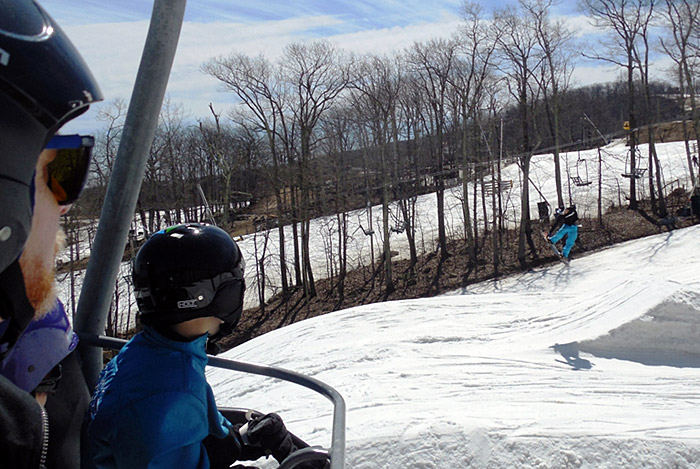 Checking out the Wintergreen Terrain Park. Photo by Jim Kenney.

Our group grew to seven by lunch time and we commandeered a public gazebo Wintergreen had built near their renowned Adaptive Ski Center. One of our gang brought a portable BBQ grill and we cooked hot dogs and hamburgers for a classic spring ski lunch with tremendous views. Wintergreen is set amidst 4,000-foot mountains not far from the scenic Blue Ridge Parkway. 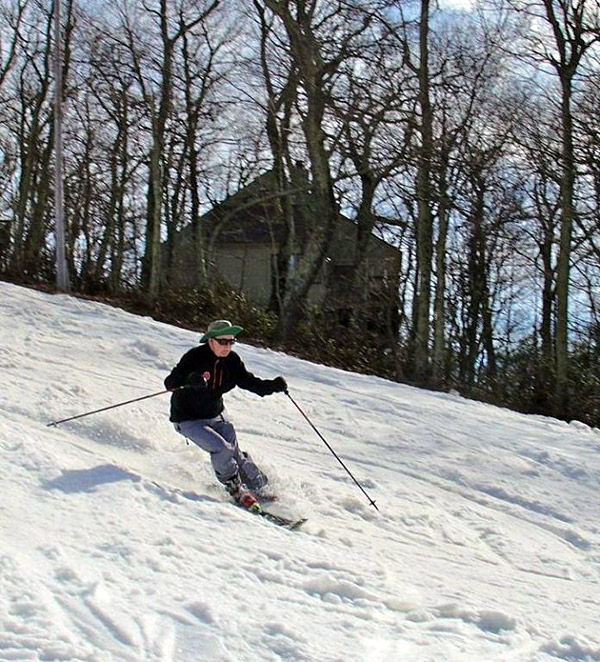 We spent the afternoon bouncing back between the Big Acorn and Highlands trail pods. Highlands is served by its own dedicated high speed quad chair. We got a bunch of fun runs on Cliffhanger trail late in the day when the slush was cleared away from the center of the trail exposing a firm, but edgeable surface underneath. After lunch there were few others left on the trail with us. It was a great spring ski day and some in the group racked-up in the neighborhood of 20,000 vertical feet. 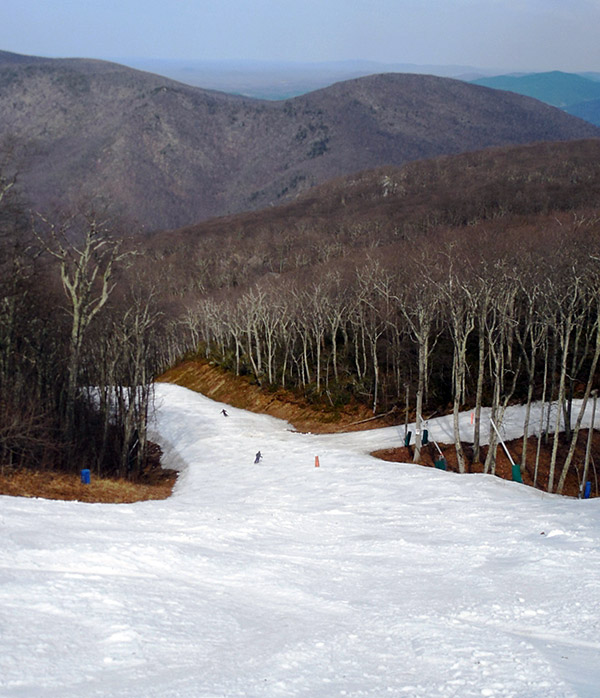 Last hour of the last day and still a lot of April snow at Wintergreen. Photo by Jim Kenney.

I vanpooled down from Northern Virginia to Wintergreen with several others. It took us about three hours and we arrived at 9:30 a.m. and left around 5 p.m. Wintergreen had some attractive spring prices in effect ($40 all day tickets and other discounts). I started this season skiing at Liberty, PA back on November 30, 2013 and finished at Wintergreen on April 5, 2014. Lift served local skiing in six different months in one winter is unprecedented for this old DCSki dog. Thank you Wintergreen for a sensational finale to a sensational season!


Video of skiing at Wintergreen on April 5, 2014 by Vince Kenney