For snow lovers, this season has been one for the record books: long stretches of freezing temperatures, never-ending snowmaking opportunities, and even ample snow contributions from Mother Nature herself. Skiers and snowboarders have been giddy all season long. (To fans of warm weather, I’m sure we’ve been insufferable.)

And yet, somehow, March 5 arrived and I had yet to make my inaugural ski runs of the season — a season that has been the best the Mid-Atlantic has seen in a long, long time. It’s pretty embarrassing, really — after all, I’m the Editor of a major ski publication. I’ve got some slope cred to maintain. So I ditched work on Wednesday, pointed the car west, and headed to the slopes of Pennsylvania’s Whitetail Resort. 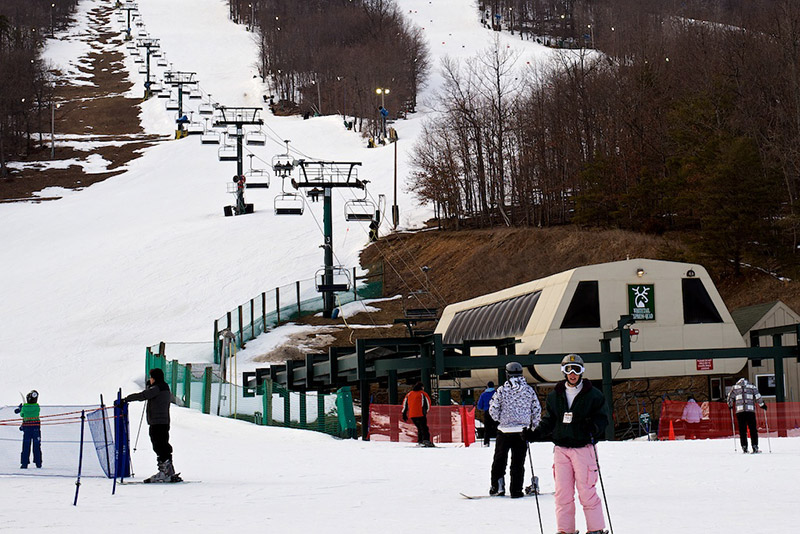 Accompanying me was Frankie, a friend who had never been on skis before. Frankie is exactly the kind of person ski resorts are aiming to attract: a first-timer who might become a second-timer, third-timer, and lifelong skier. There’s an uphill climb to the sport: one needs to leave the comforts of heat to head to a chilly mountain, drop some coin on lift tickets and rental equipment, and then navigate a learning curve that can result in a bruised ego — as well as old-fashioned bruises. But Frankie was eager and excited to see what skiing is all about, and I offered to show him the ropes.

We arrived at Whitetail around 11:30 a.m., and were greeted by a beautiful day. With sunny, blue skies above us, temperatures had climbed into that perfect zone: cold enough to keep the snow in perfect shape, but warm enough to shed inner layers. After mastering his first challenge (affixing a lift ticket to his jacket), Frankie headed to the rental shop. I had joked with him that he would be receiving “comically short skis” as a new skier, so he approached the rental desk and asked for “comically long skis,” forgetting that they would be short. The rental clerk seemed unfazed by Frankie’s attempt at humor, instead outfitting him with appropriate gear — what Frankie described as skis, ski shoes, and sticks. (Don’t worry, I delicately corrected his vernacular faux pas as the day wore on.) 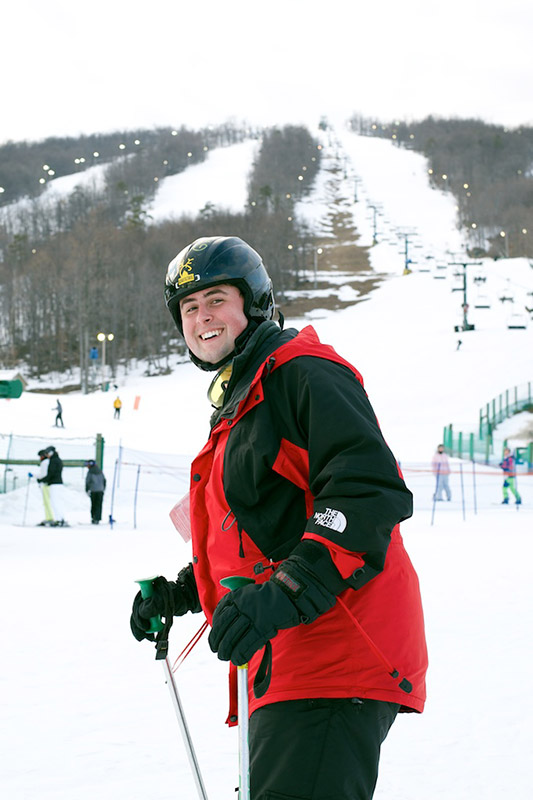 After getting equipped, we rendezvoused with two friends of DCSki: contributors Connie Lawn and Charles Sneiderman. Although the husband-wife team has contributed stories to DCSki for many years, most recently providing great awareness of the area’s adaptive snowsports programs, this was my first chance to meet them in person. (Read Connie’s Firsthand Report from Whitetail here.) After catching up, it was time to hit the slopes.

The slopes were in perfect shape: excellent packed powder conditions. All trails had been groomed except Exhibition, which was bumped up with well-formed moguls. I worked on training Frankie with the basics: the proper nomenclature (“they’re ski poles, Frankie, not ‘sticks’”), how bindings work, how to properly fall (because it’s inevitable), and how the skis interface with the snow. Over the years, Whitetail has expanded its learning areas, which now includes two magic carpets to go along with beginner-geared quad and double chairlifts. This provides the opportunity for a nice progression as beginners learn the basics of sliding, turning, and stopping. 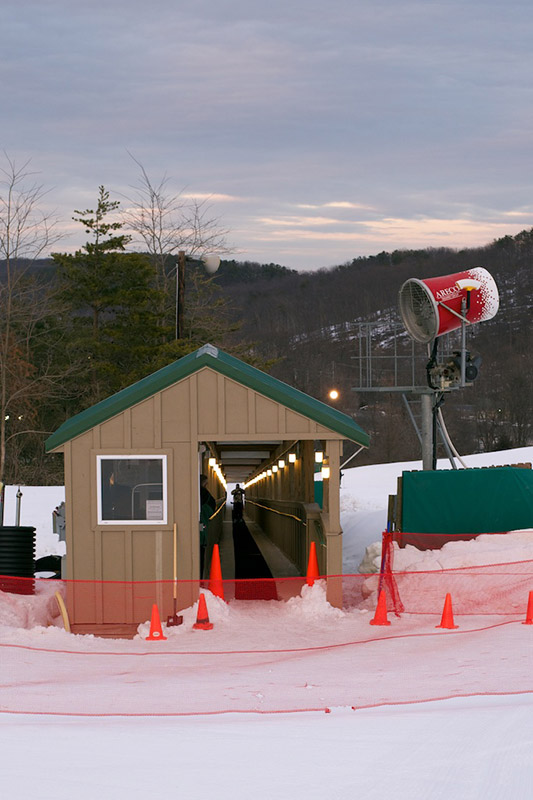 The First Class Magic Carpet takes the stress out of a beginner’s first trip to the top of a slope. Photo by M. Scott Smith.

Frankie would probably prefer that I not mention that he fell down as soon as he stepped on his first magic carpet. (Sorry, Frankie, I couldn’t resist.) But he mastered his first chairlift rides without falling. When I rode my first chairlift years ago, I wiped out as soon as I tried exiting the chair at the top of the lift, causing a chain reaction and a pile of tangled skiers and snowboarders.

Frankie was soon making cautious turns on Whitetail’s bunny slopes. He even graduated to the EZ Rider Quad for one humbling run down Sidewinder — a big step up from the bunny slopes. He made it to the bottom with all four limbs intact. Sidewinder put him outside his comfort zone, but after tackling that challenge, Northern Lights, Almost Home, and Velvet suddenly seemed like pieces of cake, and he was able to focus on refining his turning and stopping skills. 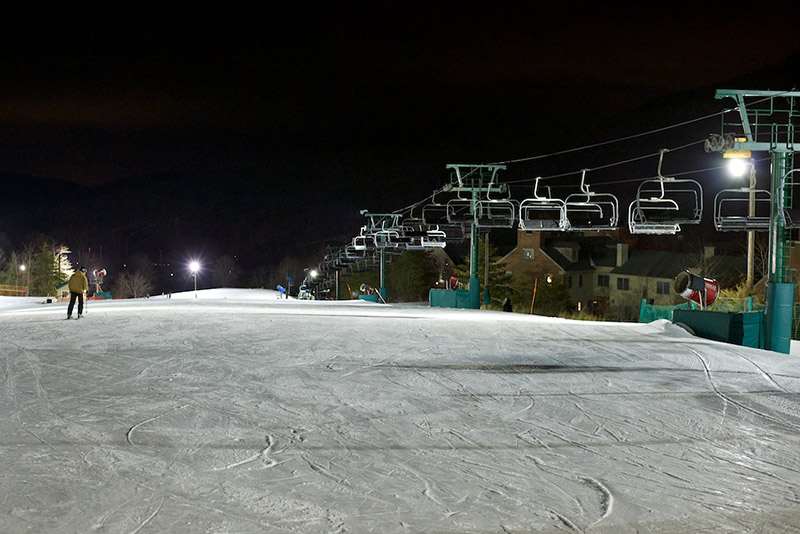 The Northern Lights slope at Whitetail, a good place for beginners to practice their first turns. Photo by M. Scott Smith.

I periodically snuck away when Frankie wasn’t looking to hit Whitetail’s advanced terrain, making quick runs on Limelight, Angel Drop, Drop In, and Far Side. 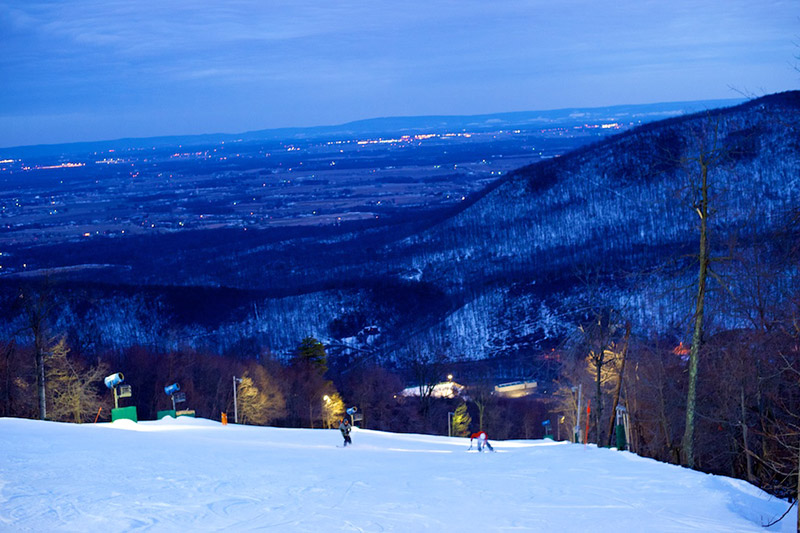 I had planned on leaving Whitetail before dark, but was having so much fun that I stayed until well after sundown. Whitetail becomes a magical place at night, with slopeside lights glittering like diamonds. 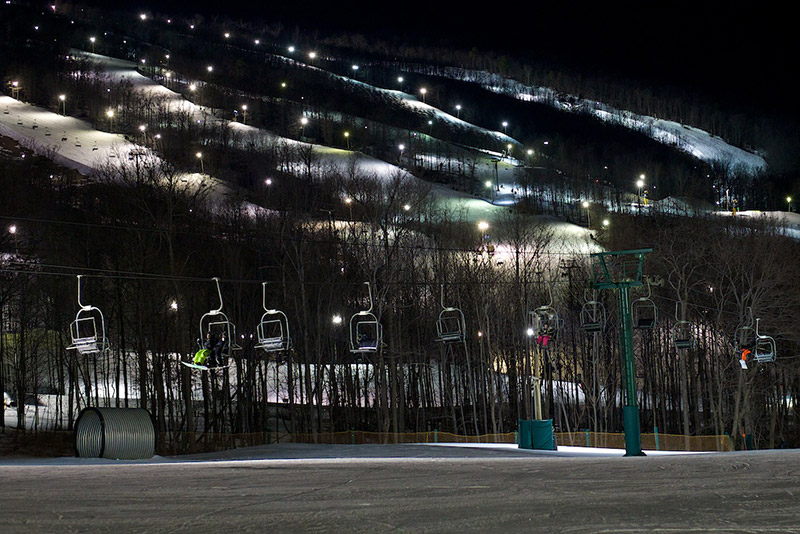 When the sun goes down, Whitetail’s lights glitter like stars in the night. Photo by M. Scott Smith.

As the sun set, the temperature fell, and the snow began to firm up. Around 7 p.m. and after countless runs, it was time to say goodbye to Whitetail.

Although we’re well into March, conditions at local resorts remain superb. There’s plenty of snow to last until the end of March, and some resorts have already announced that they are extending their season. So don’t hang up those skis and boards just yet. And if you have a friend who’s never skied, this is the perfect time to introduce them to the sport. Frankie is already looking forward to hitting the slopes again. 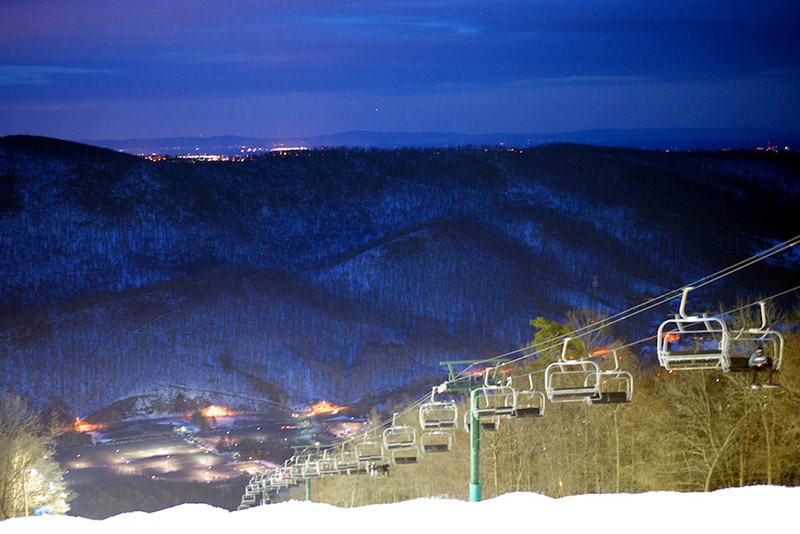 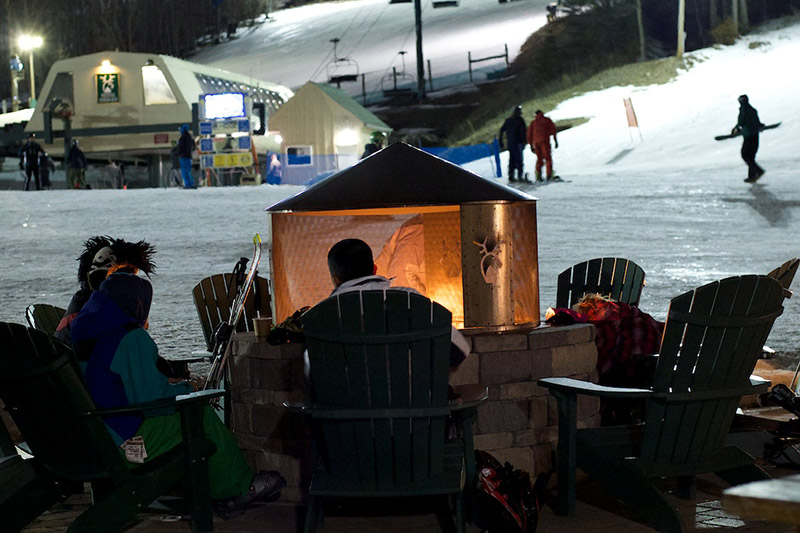 Skiers warm up by a fire at Whitetail’s base area. Photo by M. Scott Smith. 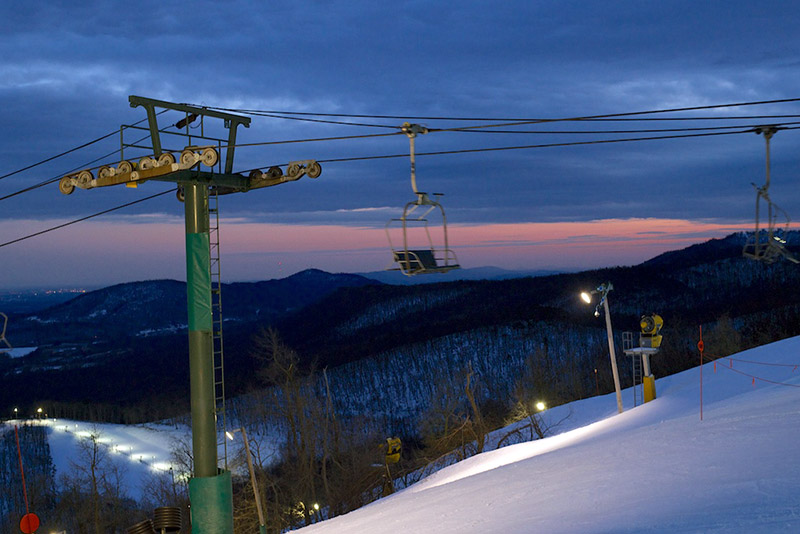 Nice photos and thanks for update.  I might ski Whitetail this Sunday.

Scott, I skied for the first time this year on Wed. also. Skied at Massantten with my sister and her family. Everyone had a good time. It was a beautiful day with great snow conditions.