“Yes, you can ski anywhere within the Jay Peak boundaries…”

It’s the defining philosophy of Jay Peak and the reason thousands of skiers and riders are drawn to a small village in Northern Vermont, minutes from the Canadian Border. Mountain President Bill Stenger would argue having the most snow in the East (356” so far this year), an impressive 2,153’ vertical drop, two peaks with 76 trails and more than 50 miles of skiable terrain is what makes Jay Peak special. I can’t argue with that. However, it’s the freedom to ski anywhere within Jay Peak’s network of trails, chutes and glades that makes it stand above other resorts.

Like any East coast mountain, Jay Peak’s conditions change rapidly. A fresh 6” can be blown away overnight by the wind. Soft rolling bumps can become crusty nightmares after a light rain. However, the Jay Peak glades (especially those in the outermost areas) are protected from the elements by trees. Jay Peak is good, even when every other mountain is dealing with bad conditions, and the “boundary-to-boundary” policy gives skiers an opportunity to seek out those secret powder stashes when new snow is scarce.

Jay is broken up into two interconnected peaks: Stateside & Tramside. The larger Tramside is served by four lifts. Beginners can enjoy the Moving Carpet or Metro Quad. More advanced skiers can ride the Flyer detachable quad or Vermont’s only Aerial Tramway. At the summit, skiers can access Url’s Dream. At three miles, it’s Jay Peak’s longest trail and takes skiers past most of the trails, chutes and glades Tramside has to offer. More adventurous skiers can drop into the Face Chutes. This network of steep, narrow chutes is located directly beneath the Aerial Tramway and can easily become the most exhilarating run of the day.

Stateside is smaller but no less challenging and fun. Beginners can take the Queens T-bar or Village Chair. More advanced skiers can access Stateside trails on the Jet Triple Chair or Bonaventure Quad. The Jet Triple Chair takes skiers to a series of more traditional New England trails. The Jet, Haynes & U.N. are steep fast runs with the occasional series of bumps. However, the glades keep Stateside skiers coming back for more. Timbuktu & Kitz Woods are both short glides from the Jet Triple Chair. Timbuktu is a rolling decent along the Eastern Jay Peak boundary with tall hardwood trees and two steep drops. Kitz Woods is narrow, consistently steep and filled with pine trees that create a barrier between the glade skier and nearby trails. Kitz Woods has several exits onto the wider but very challenging bump run, Kitzbuehel.

You don’t visit Jay Peak to party. There are no DJ’s, theme parties sponsored by Budweiser, leggy blondes or beefy bouncers. If you’re looking for a “scene,” you’re out of luck. Jay Peak and the surrounding towns host an eclectic mix of people. I once read the Jay Peak vibe described as “hippies and farmers and skiers, oh my!” It’s a small scene, but there are many great places to eat, drink and be merry. I’ve had some outstanding meals during visits to Jay Peak. The Jay Village Inn has very nice rooms, a sauna and one of the best restaurants & bars around. You can enjoy a beer and giant plate of nachos by the fireplace (no joke, it’s like 5 pounds of nachos) or sit down to a fantastic dinner. In the morning the Jay Country Store is the best place to grab an egg sandwich, a Gatorade and the Burlington Free Press.

A short drive down the mountain to nearby Montgomery Center brings Jay Peak skiers even more dining options. The Belfry is a converted schoolhouse serving dinner and drinks from “4 pm to ???” according to a sign on the door. The gigantic special board changes regularly. It’s full of impressive choices and has something for everyone. Further down the hill, the Snowshoe Pub and Lodge has a laid back atmosphere, dozens of specials and discount rooms. Don’t expect housekeeping services. Jay Peak offers some great mountainside and slopeside lodging options. The Stonypath condos are very affordable and can accommodate up to 6 people. The Slopeside condos are newly remodeled and offer ski-in / ski-out convenience.

Jay Peak has the most snow in the East, miles of trails, the best glades, a fantastic staff and it’s surrounded by two unique Vermont towns. 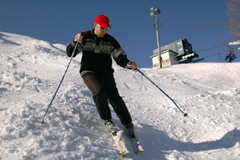 Steve Bamonti was introduced to alpine skiing in New York’s Catskill region. After a few seasons, he was hooked and became a regular fixture in the Adirondack and Green mountains. You’ll usually find Steve, a dedicated Northeast skier, deep in the glades searching for a fresh stash of powder. He currently lives in Maryland with his wife, Nikki.

Slideshow of images from Jay Peak

DCSki Reader
November 3, 2009
There are some detailed tips on Jay Peak glade skiing and local dining in this article. Good stuff.